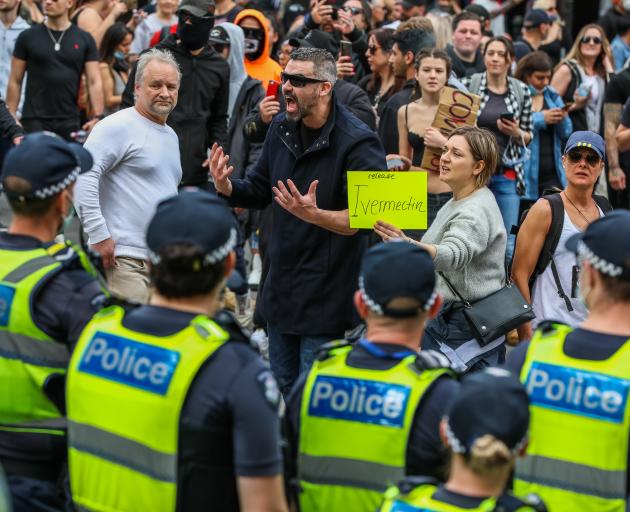 Anti-lockdown activists clash with police during a protest in Melbourne earlier this year. Photo: Getty
Victoria today reported the year's biggest one-day rise in Covid-19 cases as authorities plan to pause public transport and deploy thousands of police in Melbourne ahead of an anti-lockdown protest over the weekend.

Public transport into the city will be shut from 8am to 2pm (local time)on Saturday, roads blocked and thousands of police officers deployed in Melbourne, the state capital, Victoria police said Wednesday evening. Offenders could be fined up to A$5,500 each.

Melbourne's 5 million residents have been enduring their sixth lockdown, the most by any Australian city since the pandemic began, with officials aiming to exit the strict stay-home rules through higher vaccination rates.

A total of 514 new coronavirus infections were detected in Victoria, the majority in Melbourne, exceeding the year's previous daily high of 473 on Monday.

Sydney and Melbourne, Australia's largest cities, have ramped up their immunisation drives as the country struggles to contain a third wave of infections fuelled by the highly infectious Delta variant, forcing nearly half its 25 million people into strict stay-at-home restrictions.

First-dose inoculations topped 80% in New South Wales, home to Sydney, on Wednesday, prompting officials to end a nightly curfew in the 12 hard-hit suburbs in Sydney's west, while coverage in Victoria neared 70%, allowing some curbs on travel and outdoor exercise to ease.

Authorities have pledged to relax many tough restrictions when dual-dose vaccination rates reach 70%, expected next month.

A national reopening plan revealed by the federal government in July urges Australian states and territories to start living with the virus once 70%-80% of the adult population becomes fully vaccinated.