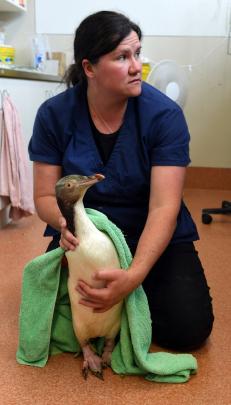 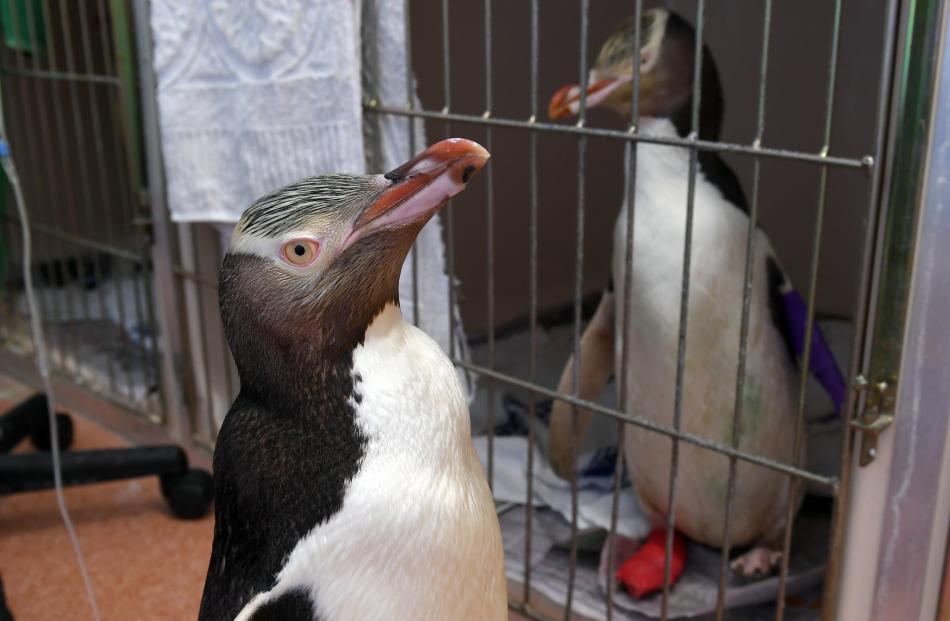 An injured male yellow-eyed penguin visits a female friend he met in the temporary penguin hospital at the Otago Polytechnic School of Veterinary Nursing. 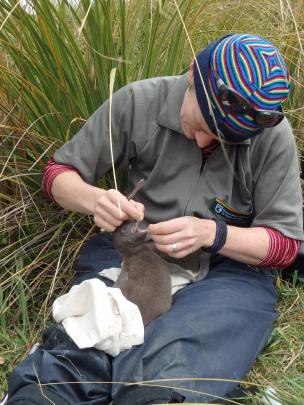 But it is not babies she is looking after, rather injured yellow-eyed penguins.

The South African yellow-eyed penguin specialist has spent the past two months spearheading the temporary "Hoiho Hospital" at the Otago Polytechnic School of Veterinary Nursing in Dunedin.

Operating on birds who have suffered barracouta bites down to the bone and prising open the snappy beaks of penguins notorious for their stroppy nature is far from glamorous, she says.

However, it is work critical to the survival of the  species, whose population on the Otago coast numbered just 200 breeding pairs last season.

She admits the fight, which she says feels at times like a losing battle, against the threats of starvation, climate change, barracouta attacks and unknown disease, is her "life".

Her days start with checks to ensure all penguins in the hospital have survived the night, and often end with phone calls from members of the public who have discovered yet another injured bird.

Occasionally the penguins even waddle into her dreams.

"My days start at 8am. I check that they are all still alive because they might not be.

"Then I start getting the food and medication prepared and take them out one by one, check them and clean their enclosures because they are quite dirty — no, actually they are disgusting."

If there is time she takes a quick break,  but the penguins are far more likely to have gobbled down their second fish of the day than she is to have had morning tea.

Then the operations begin.

"The surgeries take an average of one and a-half hours each because of all of the preparation before and after and stabilising them because of their small size."

The sight of a penguin stretched out on a steel operating table and hooked up to heart monitors and IV lines is  distinctly foreign.

But the species’ population is in such a critical state "every bird matters".

"In a roundabout way humans have actually caused this.

"Penguins do get bitten by barracouta but most of the other stuff is caused by humans."

Weather extremes  and changes in the availability of squid, sprat, salmon and cod caused by climate change pose the biggest threat to their survival.

She does not know if it is too late to stop the birds from vanishing altogether.

"Working with wildlife can be a bit depressing since there is not enough change fast enough to help wildlife as a whole."

However, visiting Dr Argilla in her temporary hospital, it is clear she is in her element surrounded by the  squawks of the birds and the  stench of dead fish.

She says each bird has its own personality, often accompanied with a  dash of aggression.

When the Otago Daily Times visits late on a Wednesday afternoon, Dr Argilla has admitted her old friend "Buster".

He gained the name in 2015 when she amputated one of his toes at Wellington Zoo. Last  week  he was being treated for gashes to the abdomen and right foot believed to have been caused by a shark.

Despite the new wounds, the foot  which  had the toe amputated is looking good.

The hospital’s first patient of the year, a Snares crested penguin, did not fare so well, dying on the operating table after a third operation to seal a barracouta bite.

While it is "quite hard" when a bird dies, particularly if it has been in hospital for some time, there is too much work to do to sit around and be sad about it, she says.

"This year they have been coming in thick and fast."

Fifteen yellow-eyed penguins, two Fiordland Crested penguins and one Snares crested penguin have been treated by Dr Argilla and a group of volunteers so far.

Each day once the penguins have been treated,  her efforts turn to working with a team to write business plans to attract funding to establish a permanent hospital in the city.

With the support of the Yellow Eyed-Penguin Trust and Otago Polytechnic she hopes the plight of a species will catch the attention of a big long-term investor.

While there is plenty of wildlife in New Zealand she could spend time helping, the plight of the bird with the highlighter yellow eyebrows has captivated her, she says.

"You get really nasty bites, but that’s not the unpleasant part.

"The truly unpleasant part will be if they die."

A Dunedin probiotic medicine company has teamed up with the Department of Conservation to fight a bacteria which is decimating the fragile yellow-eyed penguin population on the Otago coast.

Department of Conservation wildlife veterinarian Kate McInnes says  Corynebacterium outbreaks have ravaged the Otago population for the past decade.

It is not known what causes the bacteria, but the large ulcers which form in penguins’ throats as a result of it are deadly.

In a bad year 90% of the Otago population will be infected by the bacteria, and about half will die from choking as a result of the ulcers and malnutrition, she says.

A possible treatment for the problem was discovered by chance.

"University of Otago PhD student Sarah Saunderson, who works in immunology, was flatting with someone who worked at Penguin Place and suggested using Blis."

During the summer of 2015-16 Doc began working with Dunedin-based Blis Technologies to treat penguins with the same probiotics the company puts into throat lozenges for humans.Blis medicine was sprayed into the mouths of infected chicks every two days.

While the trial did not eradicate the bacteria, chicks who received the treatment put on half a kilo more than chicks who did not.

"We know that big chicks are more likely to survive in the wild to come back and breed, and bigger birds have healthier babies too, so this increased weight is a good measure of health, longevity and breeding success."

Doc intended to develop a prevention plan to treat chicks with the medicine before the ulcers appeared, she said.

Blis Technologies chief technology officer Dr John Hale said  while the product had not been designed to treat animals, he was pleased it helped.

"These were very sick birds and out of desperation, I think, they [Doc] were looking for any opportunity to help them," he said.