Dance doctor swings back to university 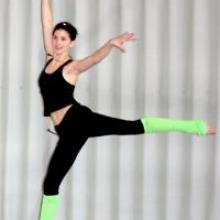 American-born scientist and dancer Dr Emily Cross has woven her passion for dance into her neuroscience research. Photo by Jane Dawber
American researcher Dr Emily Cross, who is a former Fulbright scholar at the University of Otago, has dancing on the brain.

Dr Cross (29), from New Hampshire, first came to Dunedin in 2002, studying for an MSc in psychology at Otago as a Fulbright US graduate student.

She completed her degree in 2003, also studying dance at Otago and performing with a Dunedin hip-hop dance company, Slightly Synthetic.

Dr Cross, who recently gained a doctorate in cognitive neuroscience at Ivy League Dartmouth College, in New Hampshire, was delighted to be back in Dunedin this week as part of a national tour by the Dartmouth Dance Ensemble.

‘‘It's my favourite city in the universe. There's just nothing like it in the States,'' she said.

In recent years, she has combined an interest in cognitive neuroscience with her passion for dance, by studying the functional changes within the brains of dancers as they learn complex new sequences of movements.

This week, she gave a lecture at Otago University on her research, and took part in a public performance by the troupe, which comprises 13 dancers and four management and support staff.

Better understanding of the cognitive mechanisms involved in observational learning of complex movement sequences and their performance could ultimately help find new ways to counter some of the adverse effects of head injuries and other brain damage caused by disease, she said.

Dance provided her with a valuable physical release and a form of creative expression after a day of demanding research, she said.

Ali East, who co-ordinates the dance studies programme at the Otago School of Physical Education, said the ensemble was ‘‘fabulous''.

The multinational ensemble, which performs under the direction of Prof Ford Evans, of Dartmouth College, involves members from several countries who study in many respective fields, including economics, molecular biology, and Native American studies, while pursuing their love of dance.

Suzanne Renner, a senior lecturer in dance at the Otago University College of Education, and Prof Evans previously undertook masters studies together at the University of Utah.