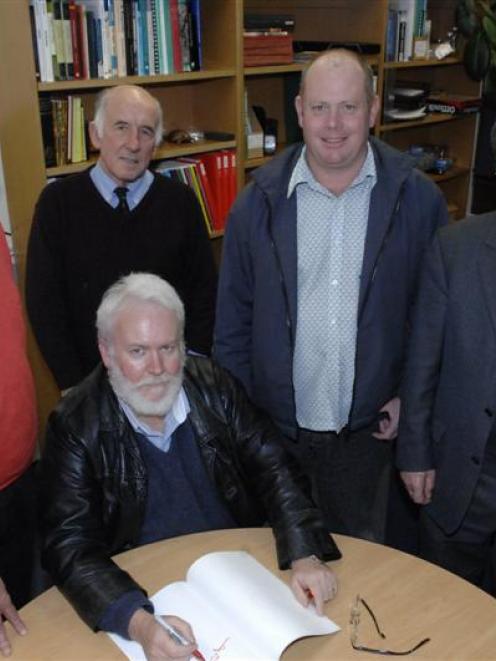 Four of the Otago archaeologists are also Fellows of the Society of Antiquaries of London.

Departmental head Prof Glenn Summerhayes says the Otago department has more fellows of the prestigious learned society than any other anthropology department in New Zealand and Australia.

The Australian National University (ANU), Canberra, has a total of three fellows, spread across two departments.

Other departments either side of the Tasman usually have either none or a single fellow.

The society aims to further the study and knowledge of the antiquities and cultural heritage of Britain and other countries.

The society is continuing to celebrate the 300th anniversary, last year, of its founding.

On Friday, a leading English archaeologist, Prof Timothy Darvill, who is vice-president of the society, visited the Otago department, and formally collected, on a parchment page, the signatures of three recent members of the society: Prof Summerhayes, Associate Prof Richard Walter and Dr Brian Vincent.

The page will be added to a 300-year-old register of society fellows, which is held in London, where the signatures are usually added in person.

Prof Darvill's visit to New Zealand has provided the first chance for New Zealand Fellows to be formally signed in here, rather than travelling to London.

A fourth Otago fellow, Prof Charles Higham, had earlier been registered in England.

Prof Summerhayes said the world-class nature of the Otago department's work in archaeology was highlighted by its society fellowships, by the high quality of its overall research output, and by its recent success in simultaneously holding five different contestable research grants from the Government's Marsden Fund.

On Friday, Prof Darvill, who heads the Centre for Archaeology, Anthropology and Heritage at Bournemouth University, England, also gave a public lecture on his recent research involving Stonehenge, as part of the society's anniversary celebrations.