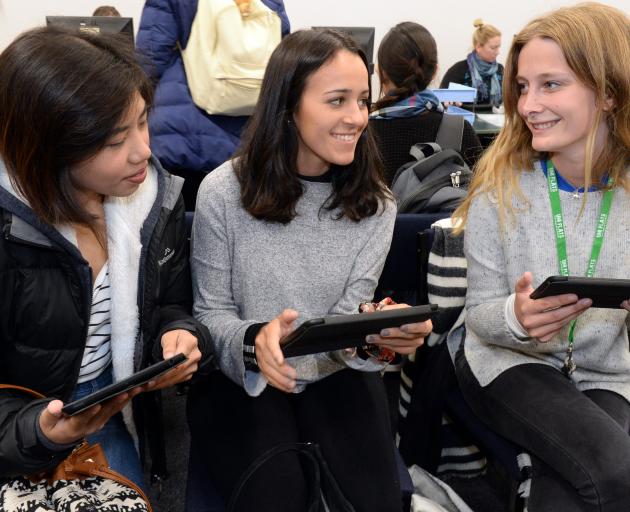 University of Otago international students (from left) Reiko Castillo (20), of the Philippines, (studying accounting and management), Berta Maeso (20) and Mireia Sellares (21), both of Spain, (both studying business) complete their declarations after attending an international student enrolment and orientation seminar yesterday. Photo: Linda Robertson

Students in it for the money should be training to be engineers or doctors,  not actors.

The Ministry of Education has just released a report showing the earning potential of young graduates ranked by different fields of study.

As expected, medical students can expect to be high earners after they graduate and have an average wage of almost three times the New Zealand median income of $38,663 five years after they study.

When it comes to shorter courses, engineers and other trades, including building, are the top earners.

Those who study building earn on average 52% more.

Otago Polytechnic architecture, building and engineering head of school Richard Nyhof said it was no  surprise  engineers and builders were among the highest earners.

"Someone finishing a diploma of engineering in two years can turn that into quite strong earning power with a relatively small student loan," Mr Nyhof said.

There was huge demand for Otago Polytechnic engineering graduates, many of whom were offered jobs before they finished their courses.

He hoped the data would contribute to more people studying engineering to help full a national skills shortage.

However, it was not all about the money;  people had to be  interested in it as well.

"It’s one part of the puzzle. It’s not the whole story."

The lowest earners in every category were  people who trained in  performing arts.

Other courses with poor earning potential included philosophy and religious studies, language and literature and communication and media studies.

The report showed studying was worthwhile when it came to future earning potential, even with  lower-level qualifications.

Some of highest earners

• Civil engineers 66% more for shorter course and 85% for longer course.

Some of lowest earners