Next president would preside over 'deeply divided America' 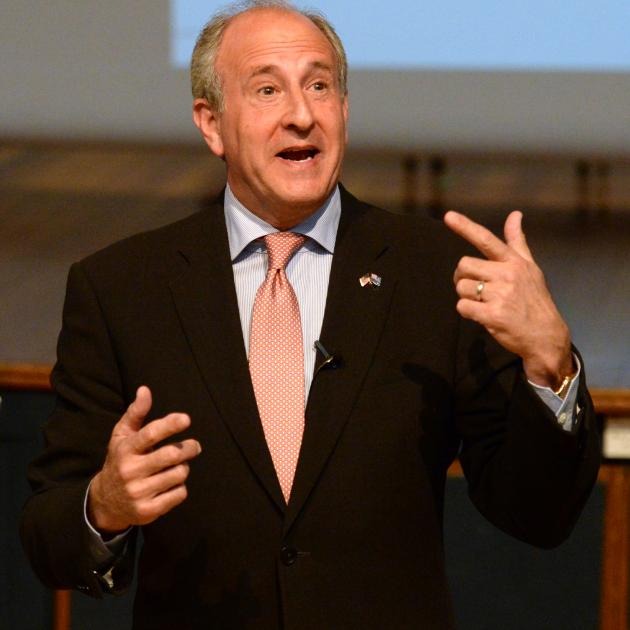 US ambassador to New Zealand Mark Gilbert gives an audience at University of Otago's College of Education auditorium an insider's guide into how the US presidential election night might play out. Photo by Gerard O'Brien.
The United States is a deeply divided nation and whoever is elected is likely have a tough time getting much done.

That was one of the messages as political experts from the US and New Zealand spoke about the upcoming election at a Fulbright New Zealand forum hosted by the University of Otago last night.

Otago University politics professor Robert Patman told the audience at the College of Education auditorium that no matter whether Hillary Clinton or Donald Trump prevailed, the next president would preside over a ''deeply divided America''.

Despite a sustained economic recovery, changes to healthcare and combat troops leaving Afghanistan and Iraq under President Barack Obama, the signs showed ''many Americans feel alienated from their country's political system''.

''For an increasing number of US citizens, the optimistic American dream ... seems to be increasingly beyond their reach.''

Racial division had widened and economic inequality continued to deepen.

''Even the winning candidate is likely in reality to have a limited capacity to govern a polarised country and manage its relations with the rest of the world.''

The theme of a divided nation was also touched on by assistant professor and Fulbright scholar Simon Nicholson, from American University, Washington DC, who spoke via a pre-recorded video about how split the country was on the issue of climate change.

Whereas in the past there was bipartisan support for environmental causes, the stance on climate change was now split on Republican and Democratic lines, Dr Nicholson said.

This meant the election was a ''big deal'' for climate change and if Mr Trump was elected it would be a ''severe blow'' to international efforts to battle it.

Otago University's Carla Lam said a Clinton win would be a victory for gender equality, but would not bring ''substantive change'' on gender.

She pointed to the election campaign as an example of how far there was to go before there was gender equality in politics.

''That there is even any doubt that Hillary could win, given the alternative, to me says enough about gender politics.

''Consider for a moment what would be made of Hillary Clinton as a candidate if she were known to be married to a man 24 years her junior, married twice before, and as someone who openly declared sexual attraction to her child in his presence on national television.''

US ambassador to New Zealand Mark Gilbert gave the audience an ''insider's'' guide to how the election night might play out based on his experience working for the Democratic Party.

He said much could be made of some of the earliest results to come out on election night, including if one party dominates enough in Virginia that a result can be called as soon as polls close.

''If they declare a victor, in my opinion, whomever that is is going to win the election.''