Orientation not what it once was 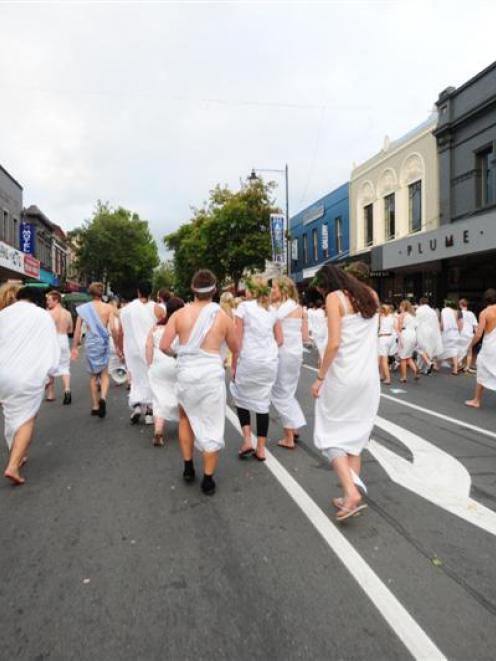 It's a decaying old cliche to say Orientation was different when I was a student, so I won't bother.

But Orientation was different when I was a student.

Apparently a toga party ticket was $25 this year.

Call me old-fashioned, but paying $25 to wander around completely bladdered in a smelly old thrift shop sheet on one of the coldest February nights on record is just crossing the line.

Couldn't they have spent that $25 on a cardigan? I do so worry about them getting cold, especially with the price of echinacea.

I guess our equivalent of the toga parade, where students now loudly invade the town and are surprised when they have buckets of sick dumped on them, was all the Friday night marches into the Octagon protesting against war and the moral sin of unmarried boys flatting with unmarried girls.

I found out years later that the primary reason for those marches was to buy weed, the old safety in numbers theory.

As a long-standing puritan, I was shocked by this, but let's be frank, a toga parade is far worse than dealing in drugs.

But it wasn't just the toga parties.

I heard the next morning students were urinating on the Museum Reserve.

On the grass, against trees - there was even one urinating into a power generator by a tent.

I don't care what Mythbusters said on the telly, I reckon if you pee into electricity, you run the risk of dying the most horrible death known to man.

But really, as a taxpayer of some renown, I have to ask the question - were they washing their hands?I certainly washed my hands nearly 40 years ago when I was crawling along George Street vomiting into the gutter, the inevitable result of a quickly-quaffed curry rice roll and chips from the Dowling Street pie-cart, or, if we were seriously drunk and could hardly walk, something from parts unknown from Joe Tui's cafe.

Which was, and this is a funny thing, by the Museum Reserve.

We all had duffle coats, seaman's jerseys, jeans and desert boots at Otago Boys High.

I had black-rimmed glasses as well, like Peter of Peter and Gordon, so we were clearly real students when we knocked on the door of parties in Leith, Grange, Queen and Albany Sts and said we were a friend of Dave or Phil.

Once inside, some of us performed better than others.

I may have looked like Peter of Peter and Gordon, but my only chat-up line was what do you think of the new Stones' single, so I was soon sitting against a wall with my hooch of Smirnoff vodka, beautifully built for a duffle-coat pocket, drinking myself senseless.

I tell you, that was a time.

If cash-strapped Alan Duff is looking for another book and movie, I suggest Once Were Duffle Coats.

University Orientation was not the music-fest it is now, although they did have hops, held under the University Oval grandstand on sawdust floors.

Dirty, filthy, dark, bacteria-riddled things, possibly with music, who would ever know.

I continued going to music Orientation gigs until 2000, and the stuff I witnessed at those - people dancing wildly to Bjorn Again as sweat poured down the Union Hall walls, phew - was far, far worse.

It was folk music in the Union Hall in the 1960s, instant Dylans everywhere.

Once a community gives in to rock music, the community collapses.

I don't recall us ever burning sofas.

Possibly because students weren't loaded like they are today with all them tax-free loans.

Often a sofa was all we had for flat furniture.

Many of us ate and slept on sofas.

And we always washed our hands. - Roy Colbert.