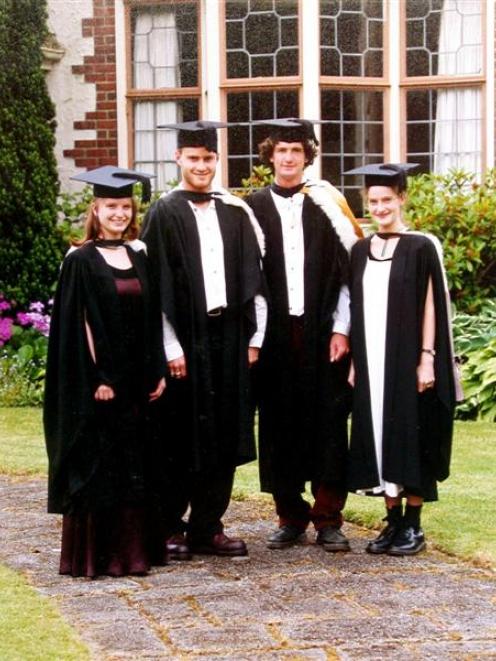 The Farry graduates (from left) Victoria, Gareth, Damon and Sasha. Photo: supplied
Auckland issued the challenge and Otago has answered.

When Siobhan Cervin recently became the sixth and last of her siblings to graduate from the same institution, the University of Auckland wondered if that was some kind of New Zealand record.

A Dunedin family can not only go one better, but two.

The eight children of Malcolm and Lyn Farry have all graduated from the University of Otago - half of them more than once.

The family has had a graduation ceremony to look forward to for most of the past 20 years, including a memorable day in 1995 when four siblings graduated at once.

"We're proud of their academic achievements and of their values.

''All of them are making significant contributions in a variety of areas."

The family is now spread far and wide, working in fields as diverse as law and music production.

Like Auckland's Cervins family, the Farry children grew up in a household which valued education.

Their parents met at university and and both have degrees.

But what would have happened if a Farry sibling or two had bucked the trend and decided to go degree-less?"Lyn and I were extremely keen to see all our children go on to tertiary education, although not necessarily to university.

"Fortunately, they all had the desire and the ability to go to university, so we didn't have to face the debate which would have taken place if any of them hadn't wanted to go," Mr Farry said.

However impressive, the Farry's tally might be toppled within a few years.

Of the 10 children of Simon and Viv Laming, from Oamaru, six have already graduated, one from Otago and the rest from universities further north.

One is currently at university, another will start next year and the youngest two are anticipating their own tertiary studies.