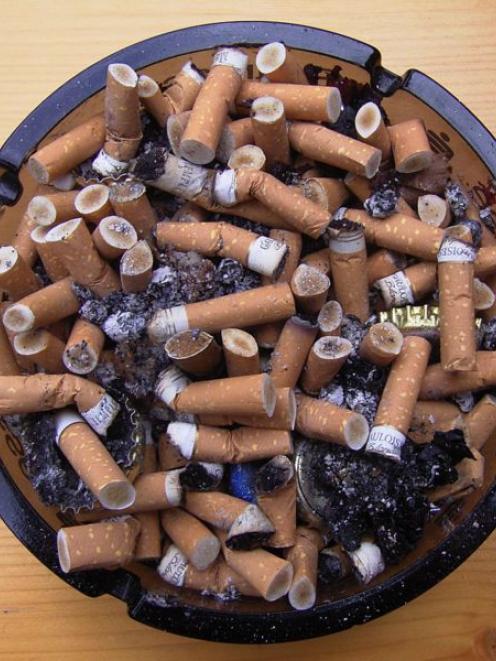 Ashtray.jpg
A survey of butts by two University of Otago researchers has revealed poor smokers get more out of each fag. Julie Fitzgerald, of NZPA, reports from Wellington.

Medical students have grovelled around the streets of Wellington collecting used fag butts - all in the name of research.

And the conclusion they came to? Smokers in poorer suburbs smoke their cigarettes closer to the butt than those in wealthier suburbs.

Wellington-based University of Otago researchers George Thomson and Nick Wilson, along with a group of medical students, collected 3500 cigarette butts from the streets of six city suburbs to determine whether the amount of tobacco actually smoked varied between the suburbs.

They found in poorer suburbs (Cannons Creek and Naenae), smokers burnt their cigarettes closer to the butt than did the residents of wealthier suburbs.

The researchers found the butts from tailor-made cigarettes used in wealthier suburbs had 75% more unburned tobacco than those from the poorest suburbs.

However, when it came to roll-your-owns, the study found no major differences between urban areas, "possibly because of faster breakdown of this type of butt".

Dr Thomson agreed there were flaws in the study, including not being able to identify who was travelling through the suburbs and dropping their butts, or whether smokers in wealthier suburbs were simply tidier, placing their butts in bins.

"One of the major things that we found was that where tradespeople came into a suburb, there were lots of butts around their vehicles."

It stands to reason, too, that wealthier smokers may get less out of each fag but can afford to buy more packets so their overall nicotine intake remains the same as poorer smokers.

"The point of it is to confirm that poor smokers are really desperate for nicotine and so they need even more help than they are being given [to give up the habit]."

Dr Thomson agreed rich smokers were desperate for nicotine too, but said when the price went up they could still afford to buy cigarettes.

When it came to giving up, poor people found it much more difficult than rich people because they had other additional stresses going on in their lives.

For this reason, they needed extra assistance, Dr Thomson said.

But you cannot tell all that from a collection of used fag butts.

"This [survey of butts] is part of the building blocks that goes towards the general argument."

Dr Thomson said he was comfortable with the conclusions of the study because thousands of butts were collected over many of suburbs, and a significant trend emerged.

Co-author Nick Wilson said further "observational" research was being considered to provide more evidence of intensive smoking by poorer smokers, especially after the next increase in tobacco tax.

The research is published in the international journal Nicotine and Tobacco Research.

Partial funding for the project came from the Health Research Council and Cancer Society. - Julie Fitzgerald