When things go wrong for denizens of the deep 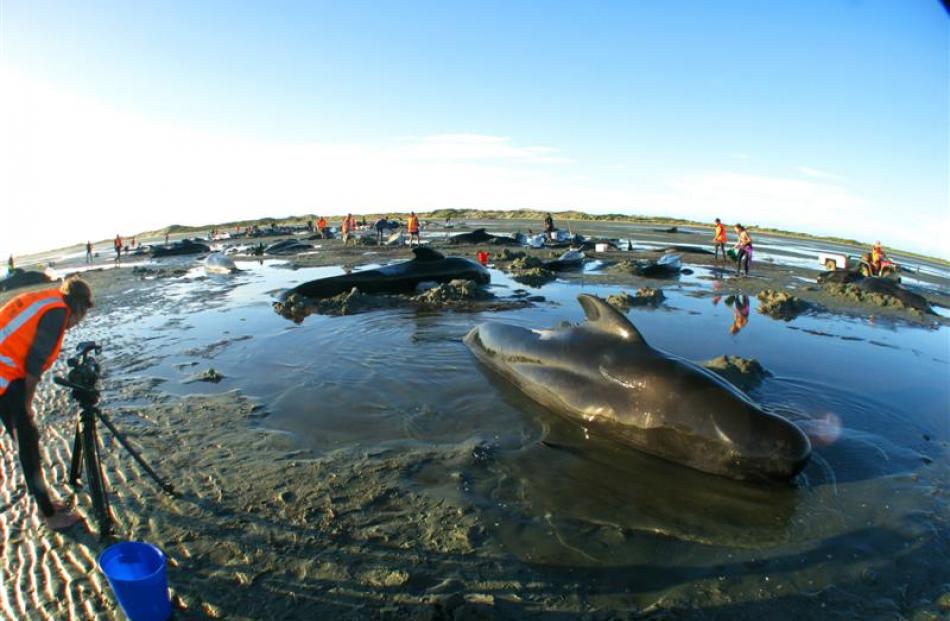 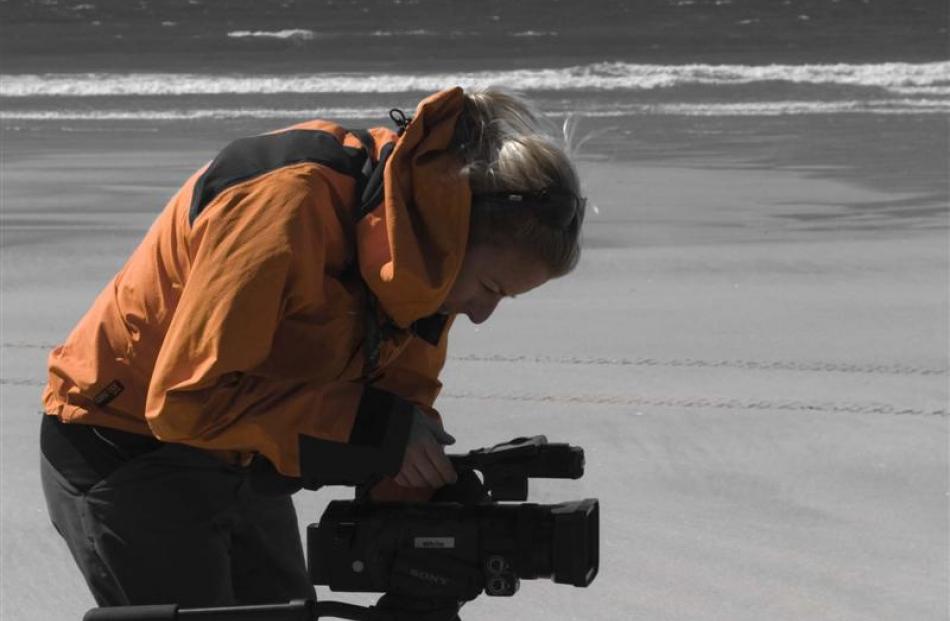 Vanessa Marshall during filming of <i>Once A Pod Of Whales</i>. Photo supplied.

Whale strandings have all the makings of a drama, as a couple of documentary-makers discovered. Tom McKinlay reports.

There was no way student film-makers Sara Kaltz and Vanessa Marshall could stand back and watch as a pod of stranded pilot whales struggled to survive on the sandflats of Farewell Spit.

The dispassionate distance of the documentary-maker is one thing. Idle indifference would have been quite another.

So the pair, who travelled to New Zealand's stranding hot-spot at the top of the South Island for their documentary Once A Pod Of Whales, pitched in.

"We did talk about that beforehand. We said, 'oh, we shouldn't help and stay objective'," Kaltz recalls.

"But what happened was, we only had one [university] camera ... and it was an all-day thing, so there was a lot of downtime.

"You couldn't just sit there and watch everybody else work. You felt that guilt, so we were able to help.

"That gave us a new perspective on our film, too."

Kaltz and Marshall's documentary will screen at the Regent Theatre in Dunedin alongside five others on Friday, all made by students of the University of Otago's Centre for Science Communicationfilm-making course, for their master's degrees in science communication.

The spur for Kaltz and Marshall was a course the latter had done with Project Jonah, a pro-whale organisation, that among other things, organises whale rescues.

It was quite a change of pace for zoology graduate Kaltz, whose previous mammalian encounters had been at a big-cat sanctuary.

Having decided to look at whale strandings, and base themselves at stranding central in Collingwood, Golden Bay, near the spit, the pair booked accommodation for the summer, when the whales most commonly come ashore. But before they were due to leave a text came through from Project Jonah to say a pod of pilot whales had lost its way. And they were off.

In the event, the documentary-makers witnessed two strandings at the spit, the second involving 99 pilot whales, of which only 17 survived.

The scene as it presented itself at the second stranding was initially quite traumatic, Kaltz says.

"When we first got there, there were not a lot of people and some people were stressed, trying to get blankets on all the whales to keep them cool and keep putting water on them. Then after a few hours word got out that there was a stranding and more and more people kept coming and all of a sudden there were more people than we needed.

"It was sad that the whales were on the beach but then nice seeing people coming together and donating their time to help."

There is still some mystery attached to whale strandings.

Kaltz says the latest theory is that seismic waves mess with whales' navigation organs. Both earthquakes and seismic surveying in the ocean are possible triggers.

"In both those situations there are seismic waves in the ocean and it could give whales the bends, or symptoms that are similar to the bends."

Whales' navigation organs are necessarily sensitive, says Kaltz, and as a result, according to the theory, can become overwhelmed.

The film has a soundtrack performed by Dr Richard Nunns, an authority on traditional Maori instruments.

Instruments on the soundtrack include one made from the rib of a southern right whale and another from an albatross wing.

Strings were added to the mix later.

In the course of making the documentary Kaltz and Marshall talked to Project Jonah chief executive Kim Muncaster, Department of Conservation ranger Simon Walls, who works the Farewell Spit beat, and members of Golden Bay iwi.

The different perspective each had was an interesting part of the project, Ms Kaltz, who is originally from Michigan, says.

"Especially when you talk to iwi, they have that cultural connection. The people we talked to said they wanted to keep the traditions alive, so they keep going to the strandings."

For Project Jonah, the motivations were different.

"All sorts of people do the [Project Jonah] course, they are passionate about whales, and about doing your part and trying to save the whales, and conservation.

"Simon was really interesting because he has been working for the department for 30 years.

Whenever a stranding happens in Golden Bay, and they happen a lot, he goes to every stranding.

"So his perspective was that, he loves whales, but at the same time he is sick of going to these strandings," Kaltz says.

The University of Otago Centre for Science Communication, in association with NHNZ, presents the 2012 premiere of films from the centre's film-making students at Dunedin's Regent Theatre, on Friday, November 16, from 7pm.

• Bluewater: A film exploring the consequences of a recent change to an Australian marine park on the users and the marine life that call the park home.

• Against The Current: A small community struggles to fight a multinational company proposing massive expansions to salmon farming in the Marlborough Sounds.

• A Shot Of Inspiration: Follows a Dunedin entrepreneur on his journey to come to terms with the challenge of crafting a top coffee liqueur.

• Favela Beat: The story of how the once shunned samba culture came to represent Brazilian identity.

• Once A Pod Of Whales: A film examining the impact humans have on whale strandings in New Zealand.