``This is not something they collect when responding to callouts,'' she said in a speech at the Holocaust remembrance service in Wellington this afternoon. 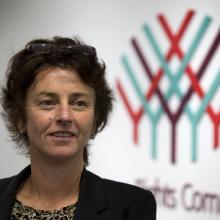 Free speech is one thing, hate speech is another. These things don't belong in my country, not in New Zealand.''

Devoy was speaking to those gathered for the annual United Nations International Holocaust Remembrance Day service at Makara Cemetery.

She said online hate speech also needed to be addressed, particularly in media website comment sections and on their social media pages.

``Ignoring the hatred and normalising it is how it starts.

``Hate starts small, but so does hope.''

Dame Susan told those gathered remembrance was important, as ``to cherish and protect our humanity, we must never forget our inhumanity''.

Wellington mayor Justin Lester also spoke at the service, saying ``we need to advance the causes of peace, of justice, and of human rights around the world''.

Mr Lester said people must not follow the politics asking them to turn their backs on ``fellow humans''.

German ambassador Gerhard Thiedemann said the Holocaust was ``a tragedy for all of humankind''.

``The view into the dark past in which Nazi Germany committed incredible crimes should sharpen our eyes for the future,'' he said.

``It must be our long-lasting endeavour to be engaged for peace, justice, and reconciliation.''

'Hate' is demented. Self defence, not offence, is appropriate. Ideological warfare propagates hate. Some say the Germans let Nazis take over thinking they could control them, and couldn't. They became a nation of stunned mullets, 'following orders', to eliminate the demonized Jewish of Europe.

That historical legacy puts us forever on the side of the Jews, as distinct from Zionism.