Steamer Basin. Photo: Gerard O'Brien
Dunedin's waterfront development plan may hinge on a bid for $100 million from the Provincial Growth Fund, but the silence from all parties remains deafening as the wait for an answer continues.

Confirmation of the sum involved emerged yesterday, as the council - which is fronting the city's bid for PGF funds - continued to work with Ministry of Business, Innovation and Employment officials on the application.

The Otago Daily Times has previously reported only that the city was seeking a major allocation from the fund, understood to be $50 million or more.

Former city councillor Hilary Calvert, in a column published earlier this year, had suggested the "eye-watering" sum being sought could be twice that amount, at $100 million, but the parties involved have refused to confirm exact figures.

But, posting on social media in recent days, Cr Lee Vandervis may have inadvertently confirmed the figure - until now discussed only behind closed doors - was $100million.

In a post discussing the council's planned investment in a pedestrian and cyclist bridge to the waterfront, he said spending on the bridge was a "prerequisite for $100 million of Provincial Growth funding".

Cr Vandervis' post was removed yesterday, but came just weeks after councillors received an update on the waterfront project during the non-public part of last month's full council meeting.

The money being sought would pay for replacement wharves, walkways and building platforms needed to provide public access, prepare the site for development and unlock private investment in the area.

Among MBIE's requirements was a business case showing the project was commercially viable, which had already led to some design changes, and talks were continuing including on the sum being sought.

The changes included shifting planned buildings inland, rather than relying on harbour reclamation or building out over the water, and staging the hotel component of the plan.

But, eight months after the city's Provincial Growth Fund bid was first submitted, none of the parties involved would be drawn on the sums involved, or the progress of the bid process, in recent days.

Dunedin City Council community and planning group manager Nicola Pinfold would only say that after discussions with MBIE staff, the council had submitted "additional information" to support the bid.

It was not known what the information involved and Ms Pinfold referred other questions to MBIE staff.

A spokeswoman for MBIE's Provincial Development Unit would not elaborate, including on the money involved, saying only Dunedin's application remained "under consideration".

"A decision will be made in due course."

A spokeswoman for Regional Economic Development Minister Shane Jones, who previously confirmed the sum involved was part of ongoing discussions, would only reiterate ministers were yet to receive a bid.

Mr Jones has previously spoken enthusiastically about the waterfront project, saying it would be "iconic and transformational" for the city and unparalleled in scale in New Zealand.

It was not clear yesterday whether the sum being sought had changed since November as a result of the ongoing talks. 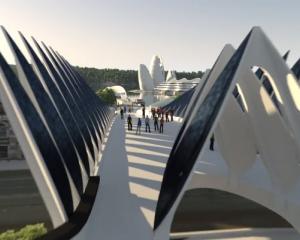 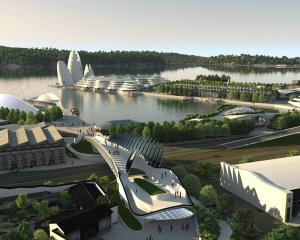 Council votes for bridge in 'game-changer'

So this project is unable to stand up on it's own merits and needs to be propped up by the tax/ratepayer to the tune of $100M.
Where have Dunedin ratepayers seen this before?

Just put it on the rate payers tab ... they wont mind ..... yeah right.
We are still paying for the 'multi purpose' stadium so whats another 100 mill.

I suspect that this will not be posted, Chris Morris it appears obvious that your don't like Cr Vandervis and are bias against him and anything he does or says. What is also obvious is you are pro Cull, Benson-Pope and Bidrose because you appear to paint them in a better light.

Just to set the record straight, it was me who removed the social media post ( due to being thin-skinned about being criticised for ‘political ravings’. ) And Cr Vandervis’ reply to my question, along with any other comments on my post, also disappeared with my post apparently.