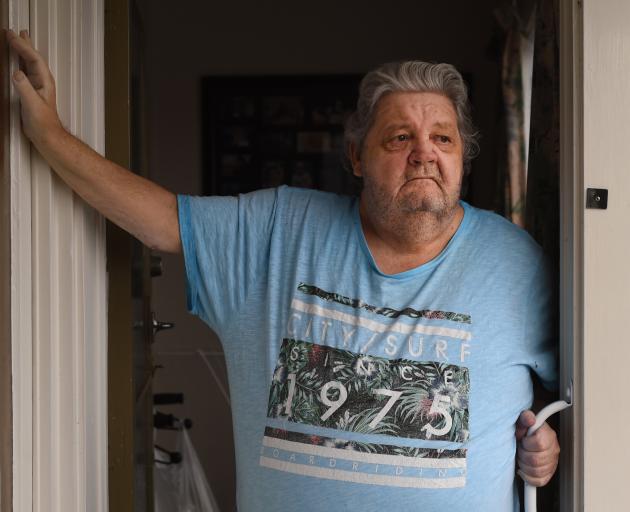 Dunedin man Russell Butler reflects on the abuse he suffered at the hands of a Catholic nun as a young boy in Mosgiel. PHOTO: GREGOR RICHARDSON
The Dunedin man who described receiving a savage beating from a Sisters of Mercy nun will have his story put on record by the Royal Commission into historic abuse.

Russell Butler, the 63-year-old Catholic beaten as a 10-year-old and now facing a terminal cancer diagnosis, featured in the Otago Daily Times earlier this month.

He described being lashed 54 times with a leather strap by Sister Mary James in 1966, when he was a pupil at St Mary's Primary School in Mosgiel.

"I got 54 off her. Fifty-four lashes, my mates counted," he said at the time.

Mr Butler decided to tell his story after receiving his cancer diagnosis and the last rites from a priest.

And, with the short time he has left, Mr Butler had hoped to have his testimony placed on the record of the pending Royal Commission into historic abuse in state and faith-based care.

Contacted again this week, he said a Royal Commission representative had been in touch to offer guidance and get his story on the record.

As a result, Mr Butler would be writing his own account this week and sending it to commissioners to include as part of the inquiry, he said.

Since going public with his story, more than 100 messages have been posted online from people wishing Mr Butler well and sharing their own accounts of Sr James.

Some defended the nuns, pointing out there were "some shockers that did terrible things but there were also many kind, caring religious people".

Others were horrified by Mr Butler's account and said the school was "notorious for its brutality".

Others contacted ODT Insight directly, including Michael Chamberlain and Michael Haggie, who were both classmates of Mr Butler and recalled extra details of Sr James and the beating she administered.

"With much sadness I recall the utter terror in me as she wouldn't stop the strapping. I also now recall that the class counted out aloud all the straps and the utter defencelessness of Russell as he received all that pain."

The memories had left him traumatised again at the "utter fear of this woman" as she "encouraged the class to call out the counting as Russell was beaten", he said.

Mr Chamberlain said he could also recall the beating, which left Mr Butler covered in marks and in a "total frenzy" as he fled the classroom in tears afterwards.

But it was nothing out of the ordinary for Sr James, who would routinely strap boys in front of classmates or after dragging them by an ear into a nearby cupboard, he said.

"She would take you in there, pull your pants and underpants down to your ankles, and then administer the strap to your arse."

There were good nuns at the school who were "gentle, quiet, [and] caring", but others like Sr James dominated those around them, he believed.

"She was just a total, mean beast."