Anime fan dresses up for the part 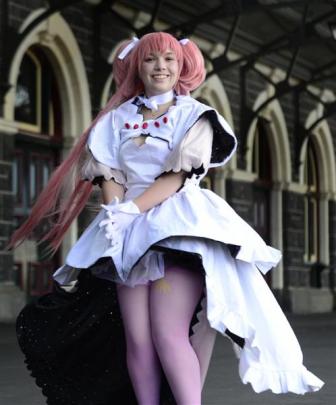 University of Otago student Shannon Jackson dresses as Madoka Kaname, a character from a Japanese animated series. It is one of many costumes she has created for previous Armageddon Expos. Photo by Peter McIntosh.

Usually she's just another Jane Bloggs, walking up the street to university lectures.

But when Shannon Jackson (20) is in costume, she transforms into one of the most recognised faces on television.

The University of Otago Japanese and linguistics student is one of an estimated 6000 people from around New Zealand who will dress up as their favourite sci-fi movie or cartoon character this weekend when they attend the Armageddon Expo in Dunedin.

Miss Jackson said she was unwittingly introduced to Armageddon Expos when a friend took her to one in Christchurch, and since had gravitated to the events.

''I like making things and dressing up, so it was only natural that it was going to be a hobby.''

She spends hours making elaborate costumes by hand, and has won awards at conventions around the country.

However, Miss Jackson assures people she is not a hardcore Armageddonite.

''I'm disappointingly normal outside of expos. You wouldn't recognise me in jeans and T-shirt.''

Her flatmates were very supportive, even when she took up half of the lounge with her sewing machine and material.

She has spent the past two weeks creating a new costume for this weekend's event at the Edgar Centre, but said yesterday it would be staying under wraps till today.

Despite the Armageddon Expo running for 18 years, founder and organiser Bill Geradts said it would be the first official expo in Dunedin.