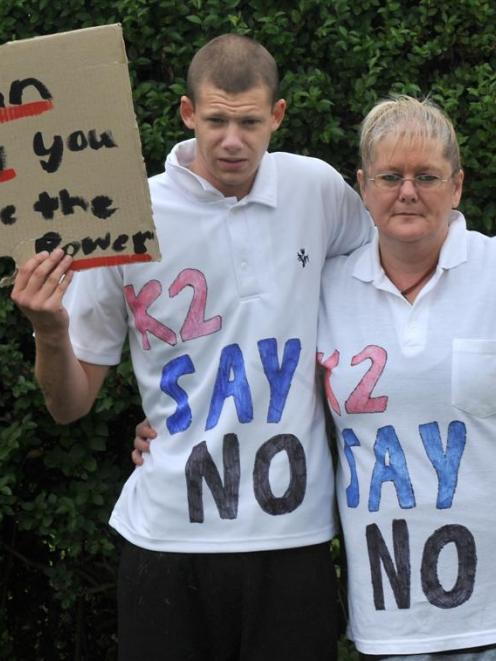 Carol Pine said she had collected about 600 signatures for a petition she plans to personally hand to Prime Minister John Key in the ''next few weeks'' asking for the immediate banning of synthetic cannabis.

She and her son, David Pine (24), would go to Wellington together if the court allowed, she said.

On April 30, her son admitted one charge of threatening behaviour and arguing with her while under the influence of K2 on March 26.

He was remanded on bail, conditions including a 9pm-7am curfew and not to use synthetic cannabis or illegal drugs, and will be sentenced on June 6.

The pair would be collecting signatures for the petition between 1pm and 3pm in the Octagon today and had made ''K2 say no'' signs to hold and shirts to wear, she said.

Mr Pine said his cravings for K2 had gone and he would never smoke it again.

He was avoiding ''old friends'' who were still smoking synthetic cannabis.

Some friends, under the age of 18, had asked him to buy them synthetic cannabis called Kryptonite, Mr Pine said.

The Smokefree Environments Act 1990 bans the sale of synthetic cannabis to people under the age of 18.

Kryptonite was the replacement for K2, Mr Pine said.

K2 was developed after its predecessor, Kronic, was removed from the market.

Mrs Pine said the banning of two substances in K2 was inadequate and Mr Key had the ''power'' to have all synthetic cannabis products banned.

''Get this stuff off our streets.''