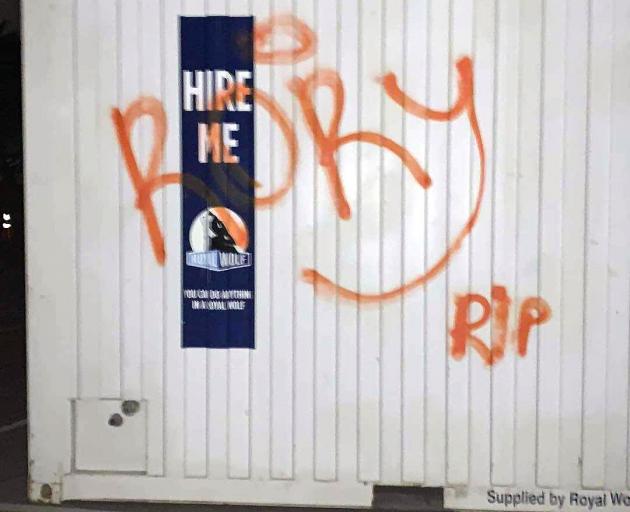 Albie Laurence, chief executive of the Ngai Tahu-owned Te Kaika health centre, said three members of the Te Kaika team had been at the Victoria Rd car park site on Tuesday evening, planning the new setup for vaccinations after the Auckland border opening.

At 10.30pm, the Te Kaika staff noticed people on the site, and went to check the containers.

It was then they noticed the graffiti, which read ‘NO VAX’ and ‘Rory RIP’, referring to 26-year-old Rory James Nairn, who died on November 17.

The death of the Dunedin man is being investigated by health officials and a coroner to ascertain whether it was connected to the Covid vaccine he had received 12 days earlier.

However, the exact cause of death was yet to be determined.

Nairn received his first dose of the Pfizer Covid-19 vaccine on November 5.

Mr Laurence said that since Mr Nairn’s death, the Te Kaika team had experienced an increase in anti-vaccination rhetoric levelled at them from members of the public.

"Protesters are within their rights to raise their concerns, but tagging on a setup where our charity is having to incur the cost, as well as — especially with the rise in anti-vaccination presence at our sites in recent weeks — the impact on the health and safety of our staff.

"We need to stay supportive of those people who are giving up their Christmas and New Year’s, and time with their families, to help protect our community."

While Mr Laurence encouraged those who had not been vaccinated to consider the benefits for themselves and their families, he acknowledged there were people with strong views against it.

In those cases, he asked they "not make it a hard time for staff who were trying to provide protection for their communities."