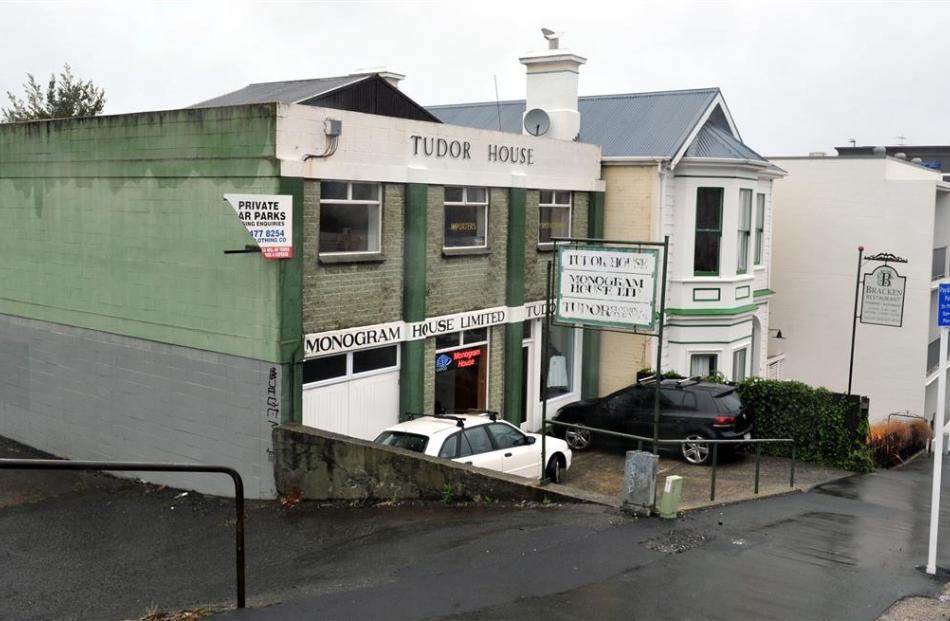 Tudor House will be demolished if the apartment block is approved. Photo by Christine O'Connor.

A proposal for 25 apartments in central Dunedin has a tick of approval from a Dunedin City Council planner, who says the project will contribute to the city's vibrancy.

The council's hearings committee will consider the proposal next Wednesday.

Tudor House in Filleul St would be demolished to make way for the apartment block, a joint venture between architect Michael Ovens and property developer Neil Lyons, both of Dunedin.

The proposal is opposed by both the owner and the occupier of neighbouring Bracken Restaurant, and the owners of the northern neighbour, Vero House, who operate dentistry clinics in their building.

"The development will be a new building on the site that currently features a tired-looking commercial building,'' the report said.

"The development will positively contribute to the overall amenity of Filleul St and the wider central business district.''

Located near the centre of Dunedin, the area was very much a "people place''.

"It is in the interests of the city to ensure that this area functions well, and continues to provide the public with a pleasant area.''

The proposed building's height was greater than the district plan permitted (11m).

At the front, the building would be 8.45m, and to the southeast at the rear it would be almost 14.6m.

The report notes other buildings on Filleul St are higher than 11m.

As well as overcoming height restrictions, the proposal would also need special permission for earthworks because of the need to cut into the ground for new retaining walls.

Overall effects on the environment would be "minor'' and the infrastructure, earthworks and transportation effects could be mitigated with consent conditions, Mr Sycamore's report said.

The proposal was notified to four parties, and three submissions were received, all opposed.

"Given residential activity is anticipated in the zone, it was determined that the effects of the proposal would be restricted to a limited number of parties, being four parties potentially affected by the bulk of the new development.''

John Darling, owner of 95 Filleul St, raised concerns based in part on previous experience of issues arising when the same applicants built apartments on another Filleul St site.

Also, "the submitter is concerned about the loss of sunlight and perception of bulk on the immediate boundary over and above that permitted in the zone with respect to his land which features Bracken Restaurant.''

The owner of Bracken Restaurant, Kenneth O'Connell, expressed concern about disruption to the restaurant and loss of sunlight.

The owners of Vero House, Sergio Salis and Chris Robertson, were also opposed.

The planner's report said the development would sit well with the "mixed use nature'' of Filleul St.

The site covered 608sq m and was zoned Central Activity in the district plan.

The development was originally proposed as 23 apartments in 2012, but was shelved for three years because of economic conditions stemming from the global financial crisis.