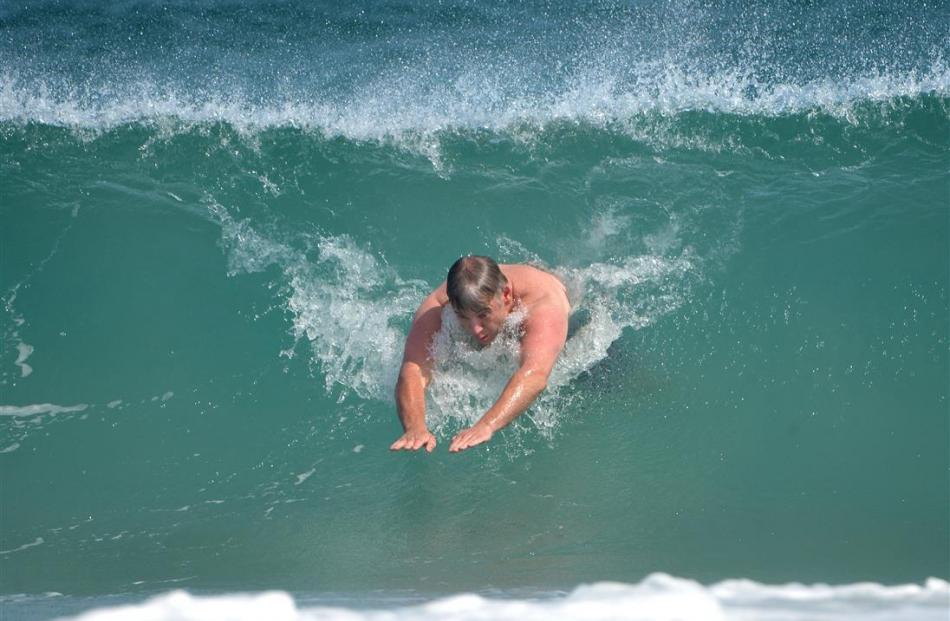 Seven drownings in New Zealand in the past four days and a spate of rescues and other incidents on Dunedin beaches has prompted a blunt water safety warning from life-savers.

New Zealand's drowning toll for this year topped 100 yesterday after a man died near Tolaga Bay on the North Island's east coast.

That compares with a toll of 90 for the whole of last year.

• Lifeguards use pop-up tent to be where the action is

"It's simply down to the weather conditions at the moment, which are ideal.

"The water's really warm. Lots of people have gone on holiday.''

Ninety surf life-saving patrols are working around New Zealand and Mr Mundy encouraged people heading into the water to do so in patrolled areas.

Within these areas, life-savers last year carried out more than 400,000 "preventive actions'', such as moving people out of developing rips.

In Dunedin, life-savers expressed concern about the behaviour of beachgoers.

That included two people, aged in their 30s, who had to be "assisted'' from the water last Monday - when temperatures topped 34degC - after deciding to go swimming in jeans and long-sleeve tops.

The pair were in separate groups, but they were not alone in opting to take to the water in "inappropriate attire'', he said.

"Jeans and hoodies aren't acceptable because someone will die if we keep having people swim like that.

"Some of them look like tourists ... obviously either just not bringing shorts to the beach, or not aware that swimming in that kind of attire is just not appropriate, especially in Dunedin,'' Mr Burrow said.

One of those helped from the water last Monday, who was "off their feet and just in too much danger'', was found to be wearing jeans and a long-sleeve top, he said.

The second, a female, was found to be wearing a hooded top, pulled up over her head.

In both cases, lifeguards with tubes swam out and helped the swimmers ashore.

"We always try to warn the people, but people just seem to do what they please, almost. We try our best.''

Mr Burrow said there were also concerns about the stability of sand dunes at Middle Beach, between St Kilda and St Clair, which were being steadily eroded.

Some people were continuing to climb them, and two children had to be warned not to dig into the foot of the dunes yesterday, he said.

"They're still eroding. People could easily get covered in sand ... that could collapse and fall on you and pretty much crush you,'' he said.

Despite the concerns, most swimmers remained well behaved so far this simmer, and were heeding advice to swim between the flags during a busy few days at the city's beaches, he said.

There were more than 100 swimmers in the water on Saturday, good numbers on Sunday and lots of families hitting the sand again yesterday, he said.

"That's been good. It's good to see lots of people getting out there and swimming between the flags. It's just making sure they're in appropriate attire and they're being safe.''

Other clubs reported similar numbers but good behaviour, and no rescues, when contacted by the Otago Daily Times.

Warrington Surf Life Saving Club senior life-saver Heather Thompson said there had been no rescues as up to 20 beachgoers each day were well behaved, except for "a few sea lions'' on the beach.

Brighton Surf Life Saving Club life-saver Blake Porteous said the beach at Brighton had been busy last Monday, when up to 350 people were on the beach, and again yesterday, when there were up to 250 people.

There had been no rescues at what was"a pretty safe beach'', he said.

A spokesman for the St Kilda Surf Life Saving Club could not be contacted yesterday.