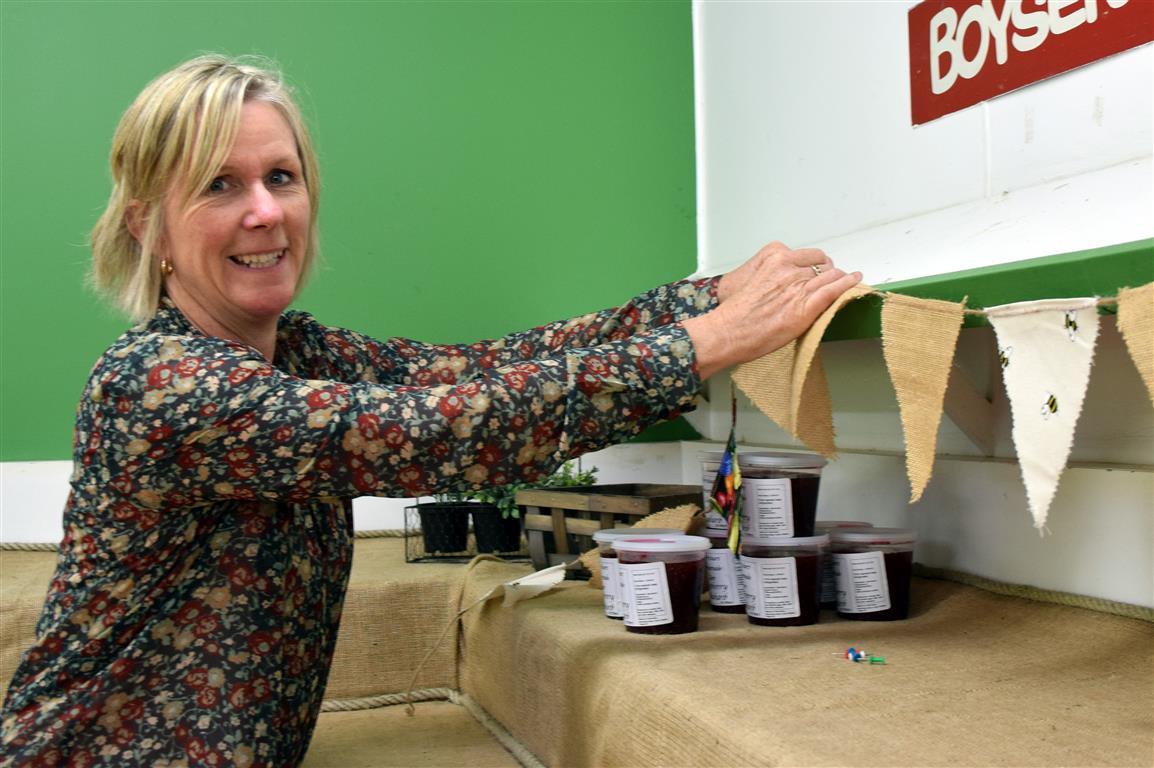 McArthur’s Berry Farm co-owner Kaye McArthur hangs bunting in preparation for her shop in Outram opening. Photo: Shawn McAvinue
Put the pitchfork down, there’s no need to stage a mutiny.

McArthur’s Berry Farm will continue to sell its ice cream after a new product range is launched from its Outram shop soon.

Farm co-owner Kaye McArthur, of North Taieri, said she has selected the products set to be sold from the shop on State Highway 87 when it officially reopens on Sunday, December 1.

For the first time, Mrs McArthur and her husband Steve have a Dunedin City Council consent to sell Otago produce, other than the berries grown on the 2ha property their shop sits on.

The changing of the business plan was ‘‘the most out there thing we’ve ever done’’, Mrs McArthur said.

The Otago products set to be sold include honey from Heriot, jams from Waihola and pip and stonefruit from Ettrick and vegetables from Outram.

The product range would evolve as the search for suppliers continued, she said.

‘‘We are still looking for more but we’ve got the basics.’’

The produce grown on the farm — raspberries, strawberries, boysenberries, currents and gooseberries —would continue to be sold.

The ice cream featuring those berries would also continue to be dispensed.

‘‘I think we would have a mutiny on our hands if we stopped the ice creams . . . people would go nuts but there is no fear of that.’’

The decision to sell produce from across Otago was made to give customers a greater choice and to give smaller Otago growers an outlet to sell their goods, she said.

Horticulture ‘‘is a dying art form’’ as it was hard to turn a profit owning a small market garden.

‘‘The wee grower can’t compete with the big ones.’’

The council consent allowed a 200sq m residential property to be built on the farm.

A house on the property would make it more attractive business proposition, as its owner would have somewhere to live and be able to be on-site to tend to the farm, such as maintaining the hydroponically-grown strawberries.

The couple had no immediate plans to start building the home, as they wanted to see if the new business model worked.

Awesome, I recall going here as a child on a Sunday drive with my Grandparents possible in the late 70's early 80's to pick Apples and possibly strawberries if my memory is correct, My Grand mother would always drop off some Cadbury Chocolates and biscuits. Very nice family - wish them well