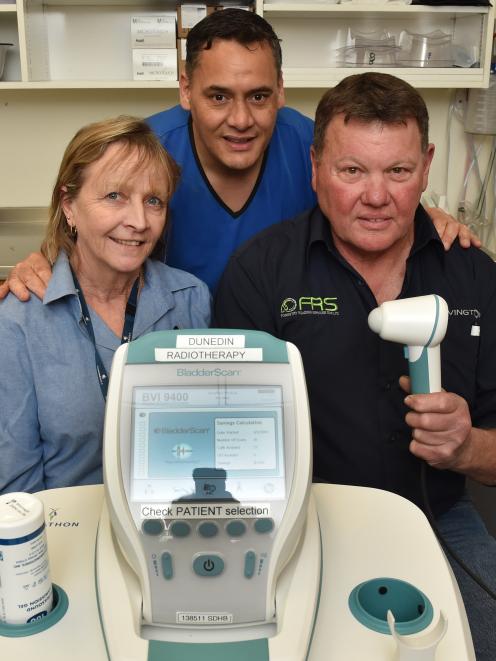 OceanaGold Macraes health, safety and training manager Bernie Murphy (left), Dunedin Hospital radiation therapist Andre Aumata (centre) and Skevingtons Contracting project manager Steve Hall have teamed up to provide a new bladder scanner which is improving the flow of treatment at the Dunedin Hospital’s oncology outpatients department. PHOTO: GREGOR RICHARDSON
Anyone who has had to sit in a waiting room, busting to go to the toilet while being asked to drink more water, will understand Steve Hall's plight.

The Skevingtons Contracting earth moving project manager had prostate cancer, and as part of his treatment, he had to have radiotherapy at Dunedin Hospital.

Radiotherapy requires patients to have a full bladder during treatment, but because Mr Hall was having his therapy at 7am, before starting work at the OceanaGold mine at Macraes, he was struggling to drink enough water to fill his bladder.

"I'd get on the table to get my radiation, they'd run a scanner over me, but then they'd kick me off because my bladder wasn't full enough."

He said he would then have to sit in a waiting room, drinking more water and wait for another 30 minutes for the next slot in the radiotherapy queue.

"It's time consuming. And you've got other people lined up, wanting to get the same treatment.

"The really frustrating bit is that while you're waiting, you really want to pee. As soon as you're off the table, you head straight for the toilet."

He asked the radiation therapists what could be done to make life easier for patients, and they said the department needed a bladder scanner.

Mr Hall went to OceanaGold Macraes and asked if the company would put money towards a new bladder scanner, and they agreed.

OceanaGold health, safety and training manager Bernie Murphy said it was a great initiative that supported the wider community, and it was something that was easy to do.

Dunedin Hospital radiation therapist Andre Aumata said the new bladder scanner, worth about $20,000, was being used to make sure patients' bladders were full enough before going in for radiotherapy.

He said the hospital had three older scanners in different departments, but they were not easily accessible to his department.

"Before we had this one, we had to go to another department, borrow it and then take it straight back.

"We couldn't afford our own one."

Mr Aumata said the new scanner had already made about 10,000 scans and it was making a huge difference.

Mr Hall said he was given a clean bill of health before he got to use the machine, but was pleased it was making life easier for other patients.

A big thanks to OceanaGold . This is why we need to come together and help these departments at the hospital The odt should paste a list of what each floor needs and the everyone could help get these needs for them.