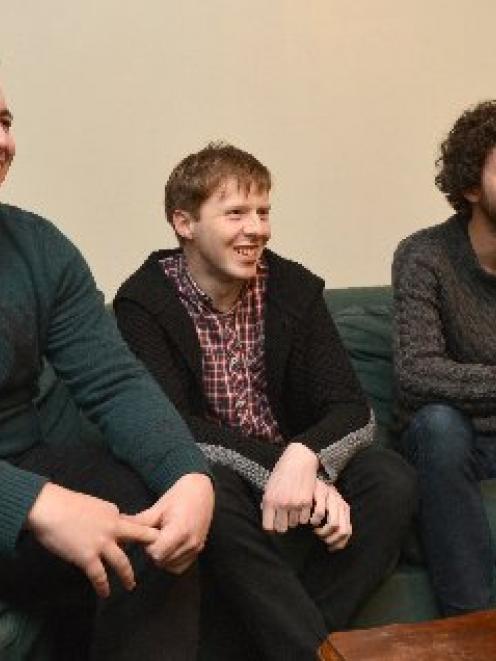 Giving their views on the 2014 Budget last night are (from left) flatmates John Brinsley-Pirie, Adam Goodall and Alec Dawson. Photo by Peter McIntosh.
A good election-year Budget, a frustration for the arts community, or a Budget from a Government unwilling to set the agenda on climate change - those were the differing views of three North Dunedin flatmates last night.

The three, who represented a range of political leanings, were quizzed on their reaction to yesterday's Budget.

The Budget's direct benefit to students was limited, although $83 million was allocated to lifting tuition subsidies in science, agriculture and some health science disciplines.

John Brinsley-Pirie, who is close to completing studies in law and politics and is a member of Young Nationals, said he was ''surprised at not only the size of the surplus, but also some of the things that went along with it''.

He supported a Budget plan for free GP visits for under-13s.

''It's a very good election budget.''

Adam Goodall finished studies in law and film last year, works at the Dunedin District Court, is involved in the theatre and arts sector and is a left-leaning voter.

Of the Budget, he said: ''I don't see anything particularly worrying right now.''

But he was concerned about the outcome for the arts and film sectors, and would be frustrated if funding dropped for those sectors, because he was trying to break into the job market.

Alec Dawson was also close to finishing his studies in politics, philosophy, economics and law.

A member of Generation Zero, a youth-led organisation committed to cutting carbon pollution, he said the Budget was ''a low point'' in terms of achieving those ends.

However, ''I wasn't expecting much on that front''.

Mr Dawson said he would like to see a government that set the agenda on those issues.