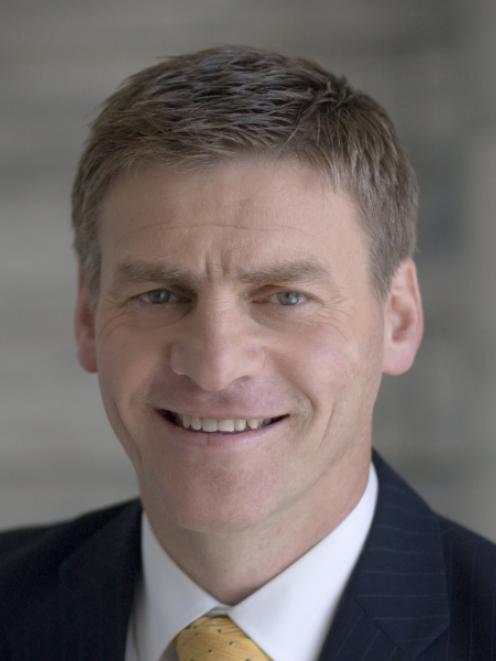 National will have the option of going into the election campaign promising tax cuts and increased spending, all the while retaining a reputation for fiscal restraint.

The Opposition parties were yesterday reduced to nit-picking about how the surplus was achieved as Mr English rolled out a series of spending initiatives that were family friendly, along with some social spending aimed at low to middle-income earners.

The surpluses are forecast at a time when there is no discernible increase in tax revenue. In fact, tax revenue has been down for five consecutive months ending May.

Rating agency Standard & Poor's left New Zealand's ratings unchanged and said the latest projections were in line with its expectations.

However, S&P analyst Richard Noonan said although a general election was due in September, the agency believed the current fiscal strategy would be broadly unaffected by any change in government, because of New Zealand's strong political and community consensus for prudential fiscal management.

The main part of the Government's $1 billion spending in Budget 2014 was a $500 million children's and family package.

It was also appropriate they were among the first to benefit from extra government spending as the economy improved, he said.

Not content with aiming for traditional Labour voters with the family package, Mr English then moved into other areas of spending designed to undermine the Opposition.

Labour has said it would set a target of reducing unemployment to a rate of 4% in its first three years of government, while forecasts by the Treasury see unemployment at 4.8% in 2017 and 4.8% the following year.

Extra paid parental leave was announced, not as much as Labour wanted, but probably enough to appease many families.

The parental tax credit was raised, the first time since 1999. And free visits to doctors were extended to all children aged under 13.

An extra $33 million was allocated in the next financial year to help vulnerable children.

That will allow eight new children's teams around the country to identify and work with at-risk children and their families, screening of people who work with children and support for children in care.

In wider policies, Mr English suggested ACC levies would reduce significantly next year, mainly through a reduction in the levy for private motor vehicles, which could fall by about $130 a year from next year.

An extra $26.5 million was allocated over four years to protect the kauri forest from dieback, a policy made much of recently by Labour leader David Cunliffe.

Mr English also tried to address some of the issues around affordable housing.

He announced a package that temporarily removed tariffs and duties on building materials covering 90% of a new home's construction, provided new funding to increase the community housing sector and increased administration support for social housing tenants.

Speaking to reporters after his Budget speech, Prime Minister John Key said the Budget was ''a reflection of the fact that the Government has worked hard with the people of New Zealand to get back into surplus, and it does give us some room''.

''So it's natural that the first place and the focus of attention would be on families, and particularly vulnerable children,'' Mr Key said.

Mr Cunliffe adopted a description of the Budget first coined by former Act NZ leader Rodney Hide to describe a previous Labour Budget - ''a fudge-it Budget'' - and said the Government had massaged the books.

He accused Mr English of turning transport spending into loans, keeping ACC levies higher than needed and cutting funding for the Canterbury local infrastructure rebuild to scrape into surplus.

The big losers were first-home buyers, he said.

House prices in Auckland had gone up $200,000 under National and all the Government offered was a saving of $3500 on a new build.

''You could get a better deal off your mortgage broker,'' he said.

National had borrowed from Labour's playbook with policies including the paid parental leave extension, he said.

''Fortunately, we have many more'', Mr Cunliffe said.

Green Party co-leader Metiria Turei said young people trying to get a foot in the door of a new home should be offended by National's Budget, which offered a small discount on building materials as its only new solution to one of the most pressing issues of the day.

''Young Kiwis got nailed by this Budget, even if those nails were a few cents cheaper.''

The surplus speed read
- A $372 million surplus in the coming year, forecast to reach $3.5 billion in 2018.
- Treasury forecasting economic growth to average 2.8% over the next four years.
- Free doctors' visits and prescriptions extended from children under 6 to those under 13.
- Paid parental leave extended from 14 to 18 weeks. Eligibility to be expanded.
- Parental tax credit raised from $150 to $220 a week. Payment period extended from first eight weeks of baby's life to 10 weeks.- $53 million over four years to establish three new Centres of Research Excellence. The University of Otago will host a Core in physics and co-host one in brain research.
- Import duties on plasterboard, reinforcing steel and nails suspended, to cut the cost of building a new home by an estimated $3500.
- $857.8 million over next four years for early childhood, primary and secondary education sectors.
- $25 million a year to help get beneficiaries back into work.$50 million over the next two years for the Canterbury Earthquake Recovery Authority.
- Eight new children's teams - at a cost of $33.2 million in 2014-15 - to help at-risk children and families.