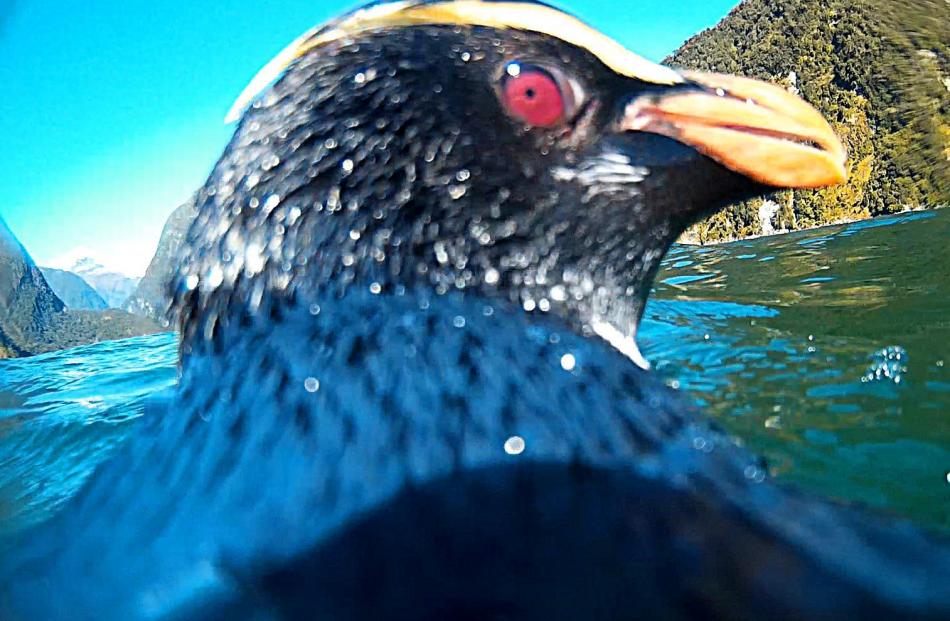 A tawaki equipped with an underwater camera mounted on its back captures a selfie in Milford Sound. PHOTOS: SUPPLIED 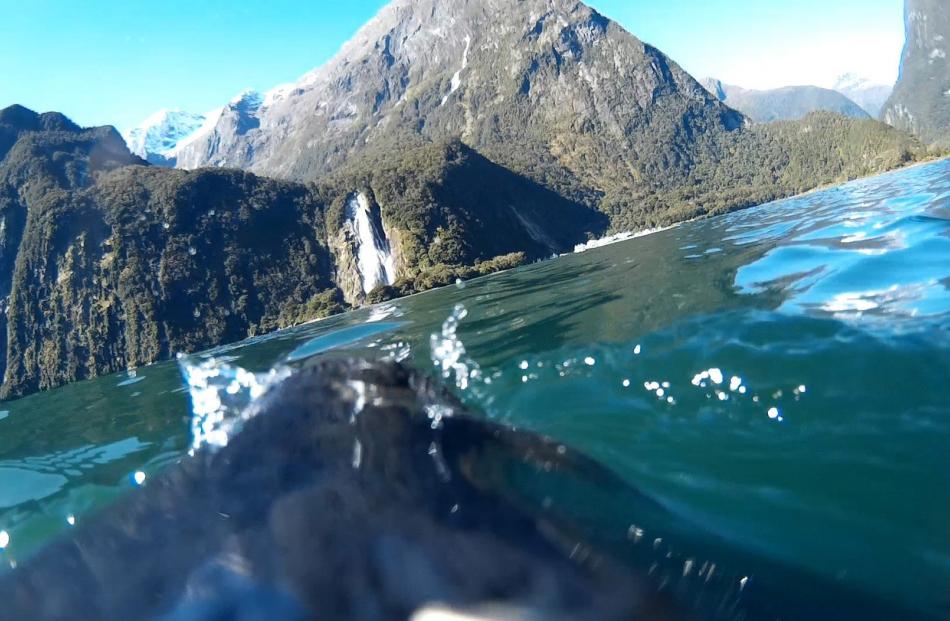 A tawaki equipped with an underwater camera mounted on its back prepares to dive in front of Bowen Falls. 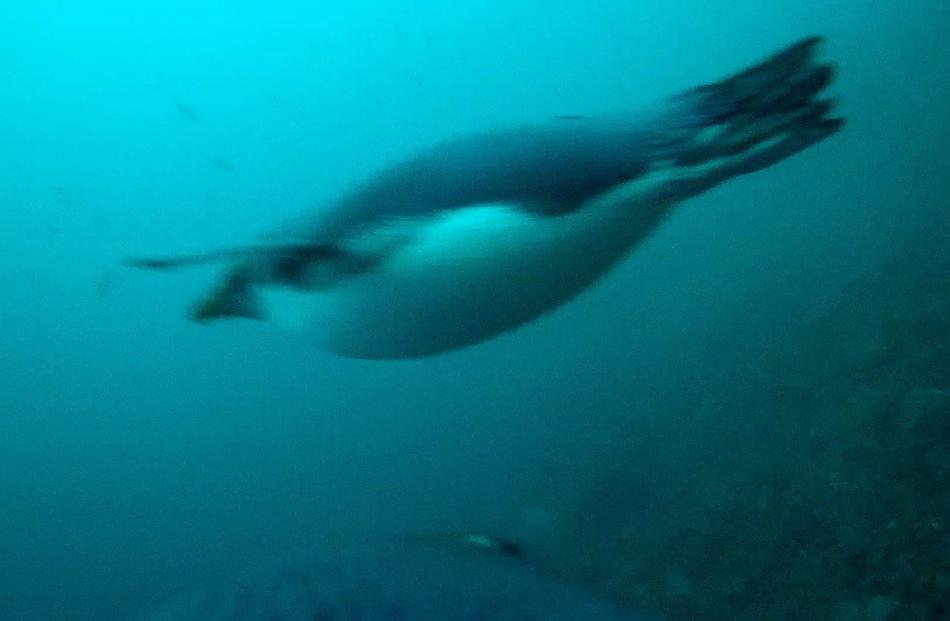 A tawaki equipped with an underwater camera swims past another bird as it forages in Milford Sound.

After watching the effects of an El Nino devastate the breeding season of Fiordland crested penguins (tawaki) on the open coast, Tawaki Project scientists have focused their tracking of the enigmatic birds in one of the South Island’s best-loved visitor destinations.

But New Zealand Penguin Initiative senior scientist Thomas Mattern said the tracking work he and others did with the Tawaki Project in Milford Sound served another purpose as well.

Unlike the better known, but troubled, yellow-eyed penguin (hoiho), if people knew where to look, tawaki could still be found in abundant numbers in the lower South Island.

And understanding what tawaki were doing now could help conservationists if their numbers started to drop, Dr Mattern said.

The yellow-eyed penguins’ path to probable extinction from New Zealand’s mainland has been well canvassed over the past several years.

What had been lacking for conservationists was a solid understanding of what a robust population of the birds looked like.

"In yellow-eyed penguins we tried to reconstruct what was going on after everything had gone down the gurgler," Dr Mattern said.

"With tawaki we tried to get the information before everything goes wrong.

"If we need to intervene, if we need to put more conservation effort in, it’s really good to know where it is most effective."

In 2015, Tawaki Project researchers were studying birds across their range in the southwest corner of the South Island, from West Coast to Foveaux Strait.

It was a strong El Nino season.

In a normal year, northwesterlies pushed nutrients from Australia to the New Zealand mainland, fuelling the primary productivity in the ecosystem, Dr Mattern said.

That year, due to the changed weather pattern, southerlies dominated.

And the reversed wind patterns played havoc with the birds’ environment.

Tawaki travelled up to 100km off shore to forage in the less productive environment.

Chicks starved as their parents struggled to find food to feed them.

Nearby, though, in Fiordland, researchers witnessed the best breeding success they ever had.

The GPS tracking of the birds showed that at one colony the birds hardly had to leave their nests for a feed.

The birds did not leave the fiord at all that year.

The revelation launched a second phase of the Tawaki Project work.

And, because El Nino events were expected to become increasingly common with climate change, it posed a question, Dr Mattern said.

"Are fiords buffer zones for the species in times of climate change?"

Dr Ursula Ellenberg co-founded the Tawaki Project with Dr Mattern, and has led the tracking work in Milford Sound.

She said she marvelled at how close to their nests tawaki in Milford Sound found food.

She could watch from the shore with binoculars as birds foraged.

Tawaki returned at lunch time and had "a bit of a scratch and a snooze", feeding the chicks twice a day, all the while staying within 3km of their nests.

But the regularity of the birds’ returning to their nests afforded Dr Ellenberg another opportunity.

Not wanting to burden the bird unnecessarily for too long, the short trips from shore allowed her to attach an underwater camera to a female tawaki, knowing it would return to its nest within several hours to feed her chicks.

The footage she got last year was revelatory, Dr Ellenberg said.

And it again separated tawaki from yellow-eyed penguins.

Tawaki appeared to hug the walls of the fiords as they dived for a diet of squid, fish larvae and small fish.

Previous footage of yellow-eyed penguins showed the birds seemed to map the sea floor with their dives in search of one of seven main prey species.

But tawaki attacked their prey from below as they surfaced.

And again the birds began surprising the scientists.

Birds at a colony in the Shelter Islands, which were expected to head to sea to forage, stayed close to home.

And a colony of tawaki deep in the long fiord racked up kilometres as they tracked the length of Doubtful Sound.

The work at both fiords would continue this year, Dr Ellenberg said.

But perhaps the birds’ best chance for survival was in the remote locations they had taken as home.

"We are in a stage where we learn in order to inform conservation efforts.

"I think the great advantage tawaki have is they’re not so close to us," she said.