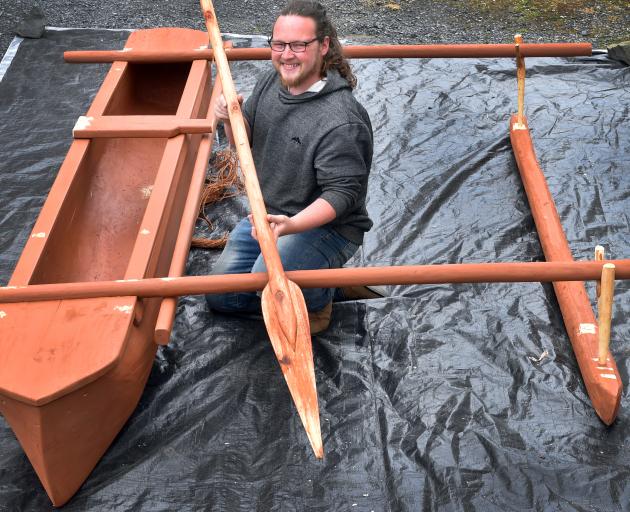 Polytechnic student Marcus Palenski is pleased he was able to get involved in the revival of vaka-building in Dunedin. PHOTO: PETER MCINTOSH
Budding arborists from the Otago Polytechnic and members of Dunedin’s Pasifika community — with the help of a Cook Island canoe builder — are collaborating to create a flotilla of traditional vaka.

Aboriculture students chopped down five acacia or wattle trees in Glen Leith over six days, which the owner donated to the trust.

Student Marcus Palenski (19) said he had the ‘‘easy part’’. It had been rewarding to watch the tree trunk be transformed into a Polynesian fishing vessel.

The canoe has taken shape under the watchful guidance of Mata Taurarii, and will be able to carry three people.

Pacific Trust Otago chief executive Lester Dean, Mr Fentiman’s uncle, said originally only one vaka was going to be built, as a project to revive the art of Polynesian canoe-building in the city.

"With the abundance of wood logs we’ve just decided we’re going to do four.

"So the next two will be started next week ... we hope to have a flotilla for a festival we plan to run in April, our Pacific Arts Festival."

His association with the polytechnic had been "fortuitous", he said.

"We’ve had some really generous support from people."

It was not only about reviving the craft, but about bringing the community together more, he said. He hoped the trust would also start to focus on other crafts as well, such as weaving.

"For us, it’s all about relationships."

All canoes would be used for fishing, but the three others would be lighter and also suitable for racing, he said.

"Mata hasn’t had a ruler. It’s all been done by eye and feel.

Mr Taurarii said rather than working with formal plans he visualised what the canoe would look like as soon as he saw the tree.

He used his own body — his handspan, fingers and the length of his strides — when he needed to measure anything.

"It’s a vision, you imagine something and then you do it, because if you leave it overnight you lose it."