Dr Ashley Bloomfield, together with under pressure Health Minister David Clark, have appeared before the Epidemic Response Committee this morning.

Bloomfield said the testing rate had increased but the positivity rate had dropped, which was a sign that cases weren't going undetected.

He said the fatality rate was 0.1 per cent, and that was an encouraging sign that early testing was sufficient - even though more deaths could be expected.

The goal was to find as many close contacts as possible within a couple of days to prevent pre-symptomatic infections.

Bloomfield has asked Otago University's Dr Ayesha Verrall who has said 1000 contact traces a day would be ideal, to do an end-to-end audit of the testing and tracing process.

National MP Michael Woodhouse said the Health Ministry situation report from April 5 showed about 5000 successes out of 8000 attempts to find close contacts, and Bloomfield said that the roughly 60 per cent success rate should be closer to 80 per cent.

The success rate should have been going up because of the lockdown, Woodhouse said.

"It's more concerning in that regard."

He added there were 19 people in the report refusing to cooperate. Bloomfield said non-compliant people could be compelled into self-isolation under the powers of the Health Act.

Clark said the use of apps to contact trace was "promising" and models, including what was being used in Singapore, were actively being looked at. The private sector had also offered help.

Bloomfield said the app in Singapore would not be a replacement for contact tracing, but it would provide a broader picture of who a positive case may have been in close proximity to.

Michael Woodhouse. Photo: NZ Herald/file
Asked about a letter signed by health workers in Auckland about access to PPE in hospitals, Bloomfield said those issues were being worked through.

Clark said that doctors saying they are being bullied into not wearing PPE should be aware about employment law around bullying and talk to their employers.

The Health Ministry had issued a directive to all DHBs to make PPE available to all frontline health workers, he said.

Covid-19 clusters should be treated as community transmission - expert

University of Otago professor and epidemiologist Sir David Skegg is advising the committee, as he did last week. 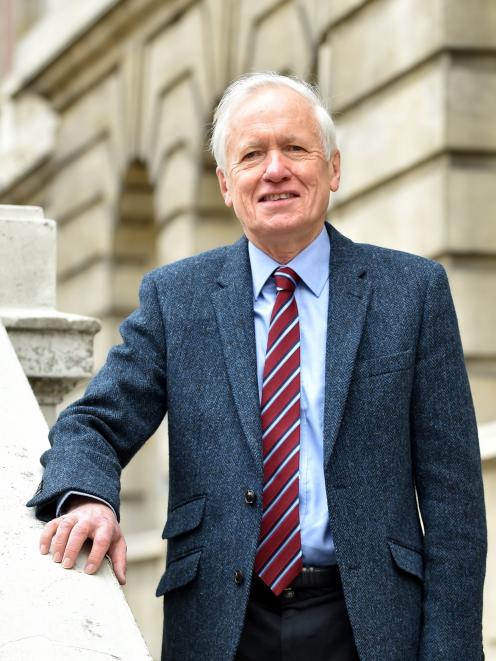 Sir David Skegg.
Skegg this morning told the committee there had been 500,000 more cases worldwide and 33,000 further deaths from Covid-19 in the last week.

He said in a pandemic of this kind, decisions had to be made quickly based on imperfect evidence, and Governments needed to agile and change positions quickly if needed.

The number of new cases in New Zealand had not been "shooting up" despite more testing, he said.

"What we need is to see two curves plotted: the cases who arrived from overseas and the people who were infected here. Regrettably, the data provided by the ministry does not make this possible."

But he said the fact there were only 13 people in hospital and one death so far showed that the outbreak didn't appear to be out of control.

He said New Zealand was the only western nation that could eliminate the virus. That meant reducing the number of new cases to zero of a very low number.

Being on a path to elimination meant moving out of lockdown quicker, compared to Australia, where the lockdown may last six months.

Hotels, schools and restaurants could open, he said, and new outbreaks could be managed by rapid identification, contact tracing and isolation.

The lockdown had been "impressive", and testing capacity had been expanded, but epidemiological surveillance was still needed to show more about community transmission.

Skegg said elimination may not be achieved "optimally" before the lockdown was lifted, and from a purely health point of view, a lockdown should be in place for six months - but people's tolerance for lockdown would "wear thin".

Singapore has had a spike in Covid-19 numbers in the last week, and Skegg said the Asian country had now closed schools in response. "Their digital technology [to trace people] had not had as big an uptake as they wanted."

Skegg said he was "a bit worried as time goes by" that the criteria for an essential service was becoming looser, adding that the cigarette factory in Lower Hutt should not have been allowed to stay open.

"We talked about going early and hard. I hope we don't end up going soft too quickly. Every single [relaxation] in the lockdown makes it less likely we're going to succeed."

Public health units were experts in contact-tracing, he said, but the published data was insufficient for him to comment on how comprehensive it has been.

Skegg has previously called for the mandatory quarantine of all overseas arrivals, and Prime Minister Jacinda Ardern is now actively seeking advice on whether that is a suitable longer term border solution.