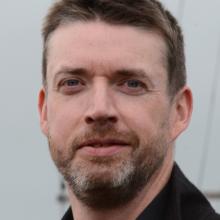 Liam McIlvanney
A Dunedin author has carried on his father’s crime-writing legacy by winning an international award named after him.

University of Otago professor Liam McIlvanney won The McIlvanney Prize at the Bloody Scotland International Crime Writing Festival in Stirling  for his book The Quaker, published by Harper Collins.

The annual prize was named in memory of his late father, William McIlvanney, a prominent British novelist and godfather of "Tartan Noir", a form of Scottish crime fiction.

The prize was presented in the Church of the Holy Rude by last year’s winner Denise Mina, author of The Long Drop.

The Quaker tells the story of Glasgow’s Bible John murders and their investigation in the late 1960s through the fictional adventures of Detective Inspector Duncan McCormack.

The McIlvanney prize was judged by Craig Sisterson, Alison Flood and comedian Susan Calman, who said The Quaker was "the stand-out book from the long-list".

"It’s one of those novels that as soon as I finished it, I looked forward to reading it again. Not only did I love the evocative recreation of Glasgow but the characters created were refreshing and surprising. It was such a pleasure to read"  Ms Calman said.

"It is an atmospheric triumph that transports readers back in time; a beautifully written novel that centres on the hunt for a serial killer while being about so much more."