Doctorate for researcher at 85 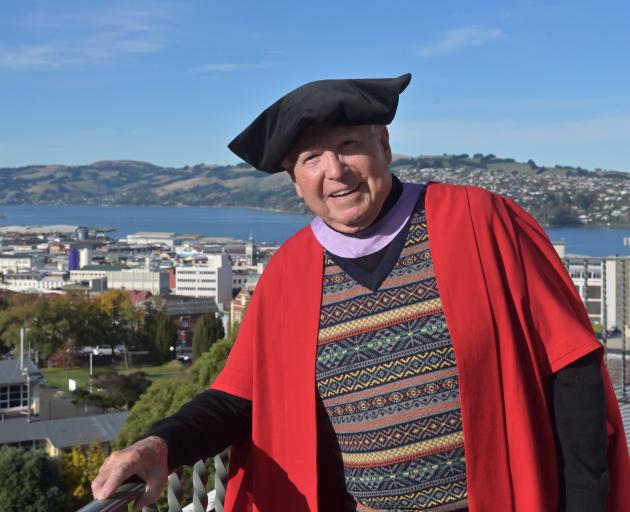 Dr Kenneth Melvin, of Oregon, United States, who graduated with an MD degree from the University of Otago at the weekend. PHOTO: LINDA ROBERTSON
The extraordinary life of University of Otago medical graduate Dr Kenneth Melvin took another turn at the weekend when he graduated with a doctor of medicine degree, reflecting his innovative cancer research.

Dr Melvin (85), who still flies his own light aircraft, recently wrote a thesis based on his innovative research, previously published in medical research journals.

His research on the "hormonal nature" of medullary cancer - a form of cancer of the thyroid - included the first demonstration of the hormone calcitonin in humans.

The research also provided a "new understanding of the multiple endocrine neoplasia syndrome".

His research has helped to achieve much better familial cancer risk assessment, earlier diagnosis and improved treatment in some thyroid cancer cases.

Dr Melvin has lived in the United States for the past 50 years, having held senior medical leadership posts, and last visited Dunedin 20 years ago.

He completed his Otago medical education in 1958, having served as Otago University Students' Association president in 1957, and "learned some important skills for real life" through chairing the association executive committee.

The university had become a "world-class beautiful campus" but so many buildings had gone up since he had been away that he found it "unrecognisable", he said.

Dr Melvin served in the Royal New Zealand Air Force during his earlier compulsory military training, and through his continuing Territorial involvement, had flown P51 Mustang fighters and Vampire jets with the No4 Squadron from the Taieri Airfield during his medical education at Otago University.

Since his retirement, he has built four small aircraft and continues to fly a two-seater sport aircraft in Oregon.

After his earlier Otago graduation, he had undertaken specialty training in endocrinology in London for several years.

Because there were no jobs at the Otago Medical School at that stage, he took up a post at Tufts University Medical School, Boston, in the United States, and undertook his thyroid cancer work with Prof Armen Tashjian, of Harvard Medical School.

• Dr Melvin also has strong family connections in medicine: his son Kenneth Paul Melvin, who is a doctor in Oregon, and his brother Marcus Melvin both have Otago MBChB degrees.