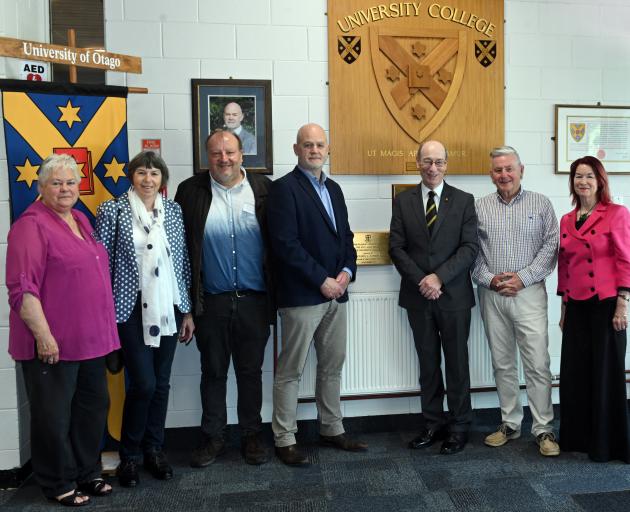 Standing with the plaque which was unveiled for University College’s 50th anniversary are (from left) Christine McKay (resident in 1971), Helen Nagels (1970 and 1971), Len Andersen (1970 and 1971), Master of the College Andy Walne, University of Otago chancellor Dr Royden Somerville QC, former warden Ashley Day (1997-2007), and Judge Annis Somerville (resident in 1969). PHOTO: LINDA ROBERTSON
From snowball fights with Selwyn College to food fights in the dining room, an alumna remembers the University College of the late 1960s as an "amazing" and eventful place.

District Court Judge Annis Somerville, sister of University of Otago chancellor Dr Royden Somerville QC, was one of the first residents of Unicol 50 years ago, in 1969.

Along with more than 100 other former residents, she returned to the college for its 50th anniversary at the weekend, activities including the unveiling of a plaque, a barbecue dinner and a quiz night.

There was a boys’ tower and a girls’ tower — and the deputy warden of the college used to patrol around with a German shepherd making sure the two stayed separate, she said.

She enjoyed the camaraderie of the hall.

"I went flatting with four young women from Unicol, and we are still friends 50 years later."

Master of the College Andy Walne, who has held the role for a year, said among the former residents were a group of people celebrating their 50th birthdays.

Plenty of guests were still at the college yesterday, the final day of the reunion, mingling, looking around the hall and drinking coffee.

When the college opened it had 300 residents — and in the last 50 years the residential hall has grown by about 200 more beds.

Mr Walne said former staff as well as ex-students — including concert pianist Terence Dennis — turned up to the reunion, and the weekend also started a new tradition — a special wall with portraits of alumni who were successful in their fields, including Olympic athletes and celebrity psychologist Nigel Latta.