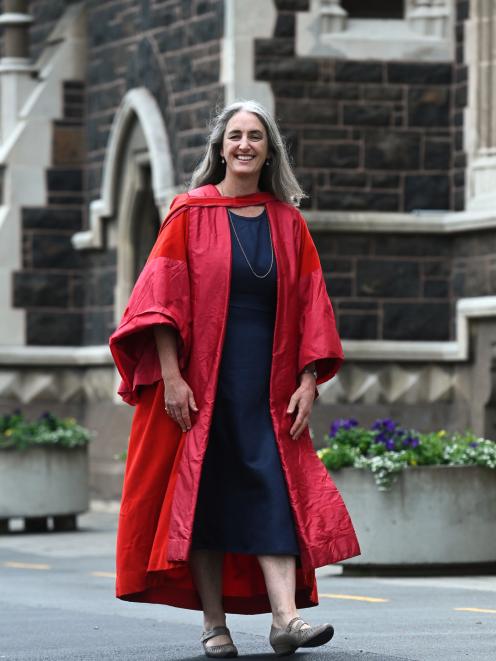 That was also the year Dr Dickson became the first female Fellow of any of the Royal Colleges of Surgery of Great Britain and Ireland.

A fourth-generation female medical doctor in her family, Dr Atmore will graduate from Otago University in a ceremony at the Dunedin Town Hall today, with a doctorate in rural health.

"It’s a mixture of elation and exhaustion, to get to the end of a really long road,’’ Dr Atmore, who heads Otago University’s department of general practice and rural health, said yesterday.

"But seriously, I’m really looking forward to graduating, and my family will be in the audience which will be really special – including my parents and sister who were in the audience 30 years ago when I graduated with my medical degree.

The "ongoing machinations of life" had been her biggest challenge in recently completing her doctoral studies, after four years of part-time work, packed in among many other activities.

"As for every adult student who is working, studying and has a family, fitting it all in has had its challenges. But we’ve got there."

Asked what Dr Dickson and her gown meant to her, Dr Atmore said she was a valued tipuna (ancestor) and she felt close to her.

She also shared Dr Dickson’s passion for medicine and her sense of determination, which her ancestor had needed when facing a largely male medical establishment.

Not allowed to attend Trinity College, Dublin, Dr Dickson was accepted into the Royal College of Surgeons in 1887 and was the only female medical student in her year, completing her degree and being elected to the college in Ireland in 1893.

She later completed a doctorate in medicine with a master’s in obstetrics in 1896.

An Otago medical graduate, Dr Atmore has been a doctor for 30 years and in August became head of the general practice and rural health department at the Otago Medical School.

Dr Atmore explained that her mother, Edith Atmore, had brought the gown back several years ago after her cousin, Rae Martin, an obstetrician gynaecologist in the UK, had died.

Dr Atmore said her great-grandmother was the second Irish woman to become a doctor in Ireland, and the first to become a surgeon.

"She constantly was facing barriers from her male colleagues at all levels. So she must have been pretty resilient to deal with all that and succeed."

Her ancestor was the "original generalist", as a surgeon, an obstetrician, a general practitioner, a psychiatrist and a public health physician at different times in her career.

"I reflect on her contribution to the context in which she was living, and hope to make a small contribution in my context now."

Dr Atmore is a former chief medical officer for the West Coast DHB, chairs Alliance South and is still a practising GP at a Dunedin medical centre.