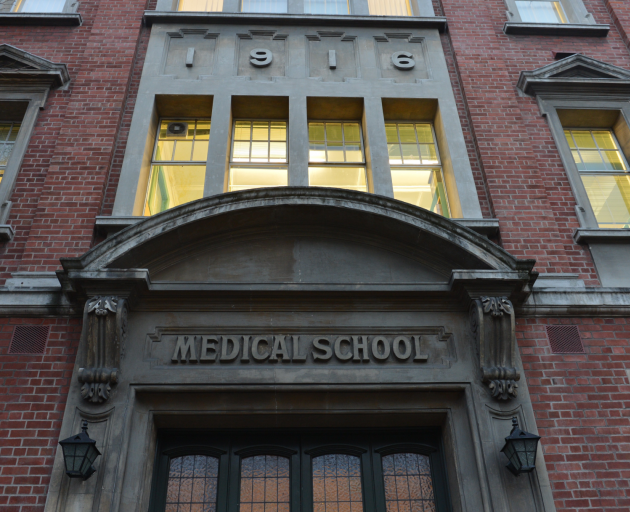 SThe university has reaffirmed its commitment to the Mirror on Society policy and minority pathways. Photo: ODT file
The way Otago University selects students for its medicine programme is set to be challenged in court.

University leaders have also confirmed for the first time that the legal challenge has implications for its Mirror on Society policy, which promotes giving priority to students from pathways such as Māori and Pasifika.

The university will oppose the court action.

University representatives had previously maintained a legal challenge did not relate to the Mirror on Society policy and preferential pathways.

The denials were issued amid discussions about whether the university should bring in caps on the number of students accepted through the minority pathways.

"Part of the context of the recent discussions is a current court challenge to the university’s regulations and processes for medical admissions," they said.

"While the university rejects the criticism of its existing processes, the legal challenge has highlighted the importance of ensuring that all admission decisions – including those through Mirror on Society pathways – are transparent and legally robust."

It is understood the university will be challenged about choosing to accept more students through the affirmative pathways than their proportion of the population.

University representatives previously said the legal action did not relate to the Mirror on Society policy or equity pathways, which no longer seems to be the case.

"It has recently become clear that the challenge will argue that the university’s ability to admit students through Mirror on Society pathways is limited by the proportions of relevant groups in society as a whole."

University leaders had previously not said why the idea of caps had been raised in a discussion document. They also said no changes to the medical admissions process had been formally proposed.

Yesterday, they said a little more. "The intention of the discussion document was to allow us to pause and take stock of where we are and how we will move forward."

The Mirror on Society policy was adopted in 2012 and is part of a broader drive to increase the number of students from under-represented groups and improve their academic outcomes.

In the health sciences, the priority pathways are Māori, Pasifika, rural, low socio-economic and refugee. About half of the 2020 intake into second-year medicine came through those pathways this year.

The university has reaffirmed its commitment to the Mirror on Society policy and preferential pathways.

Changes are off the table for this year and leaders are now rejecting caps.

"This principle – which would slow the rate at which a representative health workforce could be achieved – is not one that the university accepts and which it will strenuously oppose before the court.

"Over the past decade alone, the number of Māori studying at Otago has risen annually, increasing by more than 35% to reach 2187 equivalent full-time enrolments in 2019. As a result, Māori now comprise more than 12.5% of our domestic student cohort, up from 8.5% 10 years ago.

"Over the same period, Pasifika enrolment has increased by more than 50%, with the university enrolling more than 1000 Pacific students for the first time last year."

There had been more investment in equity-based scholarships and targeted outreach programmes.

"Additionally, investment in academic and cultural support programmes and services has also supported the ongoing success of these students."

"In December 2016, Otago celebrated the milestone of 45 Māori doctors graduating from Otago in a single year. We have graduated an average of 38 Māori doctors annually from 2016, compared with an average of just 14 per annum for the period 2010-2015. We have followed on with increases in the number of Pasifika medical graduates, too.

"The Mirror on Society policy is a cornerstone of admissions to health sciences professional programmes at Otago and we are justifiably proud of it. We are not stepping away from the commitment it represents.

"We remain confident that all of the work currently taking place around medical admissions and our Mirror on Society policy will give us an opportunity to reconnect, recommit and set a suitably ambitious vision for workforce equity."

"set a suitably ambitious vision for workforce equity"
What is more important, workforce equity based on ethnic origins or workforce excellence?
Our health system already has major shortcomings due to poor structure, management and underfunding but to blame poor outcomes on ethnic origins of the workers is total disingenuous.
To discriminate against our brightest, our most studious, our most committed because of their ethnic origins is madness!
This Marxist view of the world maintained and promoted within our universities can only lead to the same end all Marxist experiments have. Poverty, fatalism, repression and societal collapse.
This is not the way to help our most vulnerable.

It is incredible to bias against excellence especially in such a complex area as the human body, treatments and medications and the changes and new understandings and technical know-how advances that keep coming in this field, requires an agile and very able mind to appraise and take on-board. I would think, we want the best minds. I read for "the others" not on this pathway, the points are 94% to get in - thats incredible and pushes those people in the beginning to the elite and not likely to want to stay at General Practice level. It seems well meaning, but silly rules for best outcomes across the medical practice field especially given the challenges ahead as always, in the medical field.

Oh? Maori, Pasifika and all cultures not 'Western' need doctors too. Stop this top down nonsense.