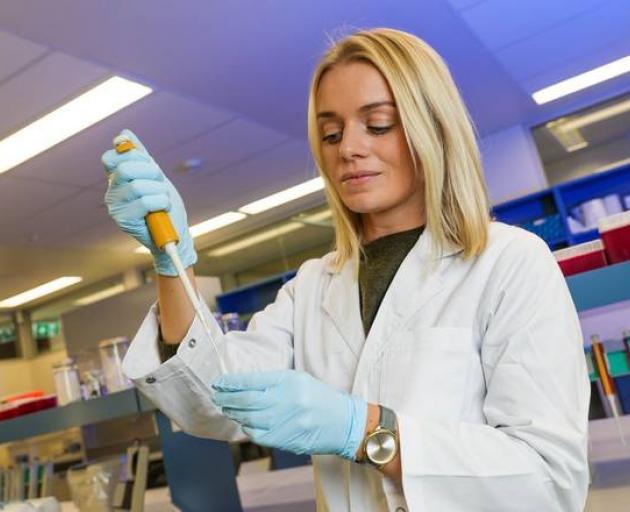 The University of Otago's Dr Jemma Geoghegan. Photo: Supplied
Scientists have completed months of detective work to reveal where New Zealand's cases of Covid-19 came from at the height of our crisis – with some surprising results.

They found most of the analysed cases that led to others being infected originated from North America, rather than Asia - and that cases that turned up here represented all of Sars-CoV-2's global genomic diversity.

They've also shown there was no sign of Covid-19 circulating in the country before the first case was officially reported.

Decoding or "sequencing" the genetic jigsaw that is the virus' genome has been a crucial part of the public health response to Covid-19 here and overseas.

Investigating the spread of the virus into a population can leave scientists with a spaghetti-like mess to untangle – but genomic sequencing can quickly tell them where a specific case came from, and pick it apart from other cases in the community.

The speed at which scientists have been able to sequence genomes from positive Covid-19 samples – sequencing work once cost billions and took months - has been among the most impressive feats of the world's fight against the virus.

In New Zealand, scientists have completed sequences in less than 24 hours.

In a just-published, collaborative study, University of Otago evolutionary virologist Dr Jemma Geoghegan and colleagues have shared data from 649 genome sequences carried out in New Zealand between February 26 and May 22 - representing about half the cases sampled over that crisis period.

Despite the comparatively tiny size of Covid-19's incursion here, the team reported 277 separate introductions of the virus, out of the 649 cases.

Of those, they estimated a quarter led to only one other secondary case – while just 19 per cent of those introduced cases led to a chain of transmission that could be observed as a lineage.

Most cases linked to North America

Most of those lineages could be traced back to North America, rather than to Asia where the virus first emerged – which reflected where it was most prevalent during the time of sampling.

The largest clusters in New Zealand were often associated with social gatherings such as weddings, hospitality and conferences.

The biggest of those - which comprised a lineage called B.1.26 and was linked to a "super-spreading" event at a Southland wedding - most likely originated in the United States.

No evidence of other infections before first reported case

The team also found no evidence the virus had been circulating before New Zealand's first case was reported on February 26 – and also that fewer cases were missed later in the country's epidemic than in early stages.

"It was surprisingly that, despite its remoteness, the viruses imported into New Zealand represented nearly all of the genomic diversity sequenced from the global virus population, and this high degree of genomic diversity was observed throughout the country," Geoghehan said.

"This highlights the vast number of introductions and how globally connected we are."

For instance, they found the effective reproductive number of New Zealand's biggest cluster was squashed from seven to just 0.2 in the first week of lockdown.

"We can see how interventions stopped virus transmission and also help link more infections to a major transmission cluster than through epidemiological data alone, providing probable sources of infections for cases in which the source was unclear," she said.

"Going forward, it is vital that genomics is part of the public health response to quickly identify from where and when any new virus incursions have arisen.

"It is also important to monitor how the virus mutates – this information is vital for any future therapeutics such as vaccines."

Because our borders remain closed, she said any new incursions of the virus would be from quarantine facilities – as had happened in Victoria, with disastrous consequences.

"Virus leaks from quarantine would look different because, presumably, these viruses would be from a single origin."

It's now been 98 days since the last case of Covid-19 was acquired locally from an unknown source.

One previously reported case was now considered to have recovered, so there were now 23 active cases in managed isolation facilities, with none needing hospital-level care.

New Zealands health professionals are to be roundly congratulated. We are extremely fortunate to have their hard earnt knowledge and our current Prime Minister to act on good advice.......and of course the hero of the moment Ashley Bloomfield.
As a population, for now, we are the fortunate few, and that is not by accident. As Kiwi's, we have a lot to be proud of. I for one, am very grateful to be a Kiwi.

Couldn't put it better Buzz.
I too am very proud to be a Kiwi, living in the safest country in the world with other great Kiwis. I too congratulate those Kiwis who keep us safe.

Science starts somewhere. Covid-19 research in NZ starts with the data we collected. NZ was SLOW to start testing. It was quick with political PR. The 0800 HealthLine was set up quickly set up, but impossible to get through to. Many people reported being cut-off after wait times of several hours. My experience, after exposure to an early case, was a 74 minute wait. I was then asked if I had a temperature in excess of 38degC. I replied that I did not own a thermometer and was told "you won't have it" and dismissed. Many people have similar stories.
Government execution of everything (apart from PR) was abysmal. The raw data being fed into NZ research about the origins of the disease here must be reflected in that light. 'The Great Influenza' by John M Barry documents how little humans have changed in the 100 years since the Spanish Flu. Laboratories feed on research budgets. This dictates what we hear. The Government requisitioned all resource from university research labs around the country working on solutions to concentrate it in government chosen facilities because the politicians and their friends allocate the funding. Dylan told us years ago 'money doesn't talk, it swears'.

You are quite correct John, our initial response was slow, and testing was dismally delayed. Many lobbied government for increased testing as fast as possible, However, we entered this without an 'instruction booklet'. And yes, while 0800 Heathline was under resourced and ultimately overun with calls, to be fair, any rush by the public to any contact platform by a multitude of people, at anytime, would be vastly impossible to operate at an optimum level. Call centre staff would have had ad hoc minimal training at best. On reflection, at that time, little was known of Covid19. Even now, we are learning more about it everyday. Our government was slow to act, we also had politicians breaking the rules. As a country, we coped as best as we could with the very small amount of information that was available. Based on that fact, best knowledge, was acted upon, and as a nation, we protected ourselves, our most vulnerable and our health workers as best we could. Yes, the call centres were overwhelmed, but our health system, and it's most valuable asset, the staff, has to date been preserved. Globally, we went into one of the most stringent lockdowns. We can remain thankful, and vigilant.