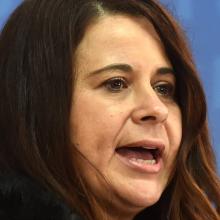 She was commenting in a witty but sobering talk, accompanied by videos showing some of her past TVNZ news reports, at the University of Otago’s 53rd annual Foreign Policy School in Dunedin on Saturday.

Some freedoms, including freedom of speech and freedom of the press remained "seriously under threat" in parts of the Pacific, she said.

Ms Dreaver and several other journalists were previously banned from Fiji for many years by a former military government, "and I spent the night in a detention centre", she said.

The latest university school focuses on "Asia-Pacific Diplomacy in Transition: Ideas, Issues and Institutions", and her talk was on  the challenges of journalism in a rapidly evolving region".

More money had been available in some countries in recent years, including from China and Taiwan, and politicians faced  higher stakes.

"There seems to be a lot of secrecy around the Pacific."

"It’s a time when media freedom is most at risk but many of us still battle on."

Born and raised in Kiribati, Ms Dreaver also has other family connections elsewhere in the Pacific and has been reporting on the area, most recently as TVNZ’s Pacific correspondent, for more than 30 years.

She revealed  covering such a complex, far-flung region did not mean a glitzy lifestyle: she did not stay in five-star hotels and was familiar with taking anti-diarrhoea medication.

Asked how New Zealand’s "Pacific re-set", with its greater emphasis on aid partnerships, was likely to go, she said "New Zealand is now considered more user friendly", including our personnel in peacekeeping forces, because of our bicultural background.

New Zealand and Australian police forces were working "very closely together and have had some massive finds [of illicit drugs]," she said.