Urquhart Castle on shores of Loch Ness, the home of the fabled monster. Photo: Getty
It's not a monster; it's just a very big eel.

Well it could be a very big eel.

University of Otago geneticist Prof Neil Gemmell has tonight announced the findings of his investigation into the existence of the Loch Ness Monster.

He last year flew from New Zealand to Scotland to examine environmental DNA in the waters.

Water samples were taken from the length, breadth and depth of Loch Ness, the  DNA from those samples was extracted and sequenced, resulting in about 500 million sequences that were analysed against existing databases.

But the research did not find evidence of Jurassic-age reptiles such as a plesiosaur, one theory of what was behind more than 1000 reported sightings dating back to the 6th century. 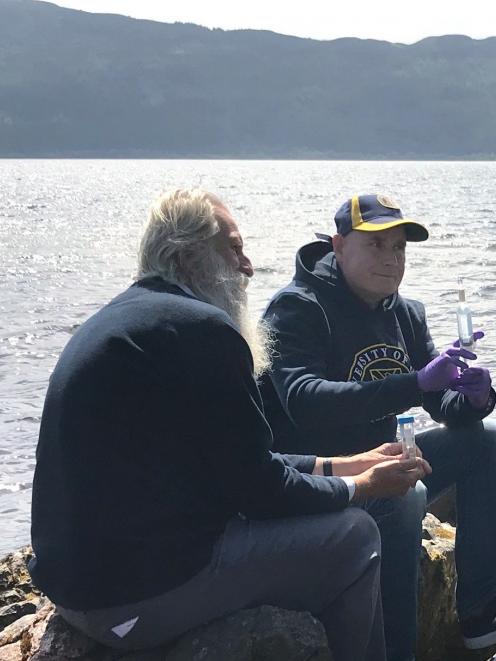 University of Otago researcher Professor Neil Gemmell (right) with Adrian Shine, of the Loch Ness Project. Photo: Supplied
"We can't find any evidence of a creature that's remotely related to that in our environmental-DNA sequence data," Prof Gemmell said.

The research team tested other predominant theories of various giant fish; such as a giant catfish or a giant sturgeon, an eel, or even a shark such as a Greenland shark.

There was no shark DNA in Loch Ness based on the sampling, no catfish DNA, nor any evidence of sturgeon, Prof Gemmell said.

But he could not refute the remaining theory, that what people saw was a giant eel.

"There is a very significant amount of eel DNA.

"Eels are very plentiful in Loch Ness, with eel DNA found at pretty much every location sampled; there are a lot of them.''

The data did not reveal their size, but the quantity of the material suggested the possibility there may be giant eels in Loch Ness could not be discounted.

Prof Gemmell said further investigation was needed to confirm or refute the theory.