By Elena McPhee
0 Comments
Students from the University of Otago are answering the call to join a final, mammoth cleanup effort after a massive landfill spill near Fox Glacier.

The Department of Conservation is making a last ditch cleanup effort this weekend, which will end on Sunday, and in total abut 200 volunteers will be on site, along with Doc and New Zealand Defence Force staff. 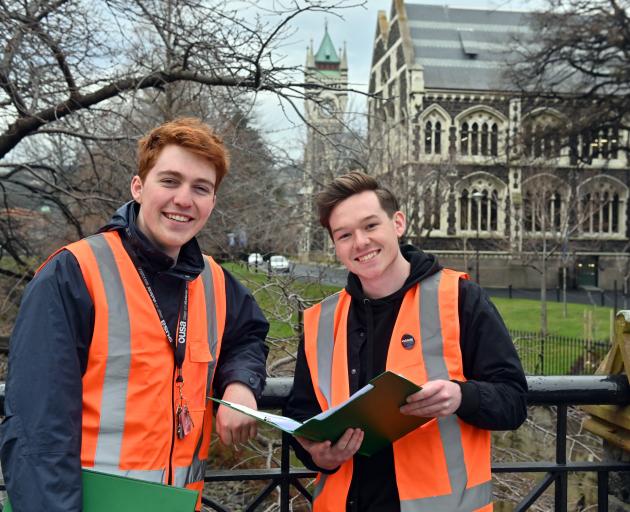 OUSA president James Heath (left) and education officer Will Dreyer prepare to join busloads of students who will head to Fox Glacier today to help with the final push to clean up rubbish from a landfill which has leaked into the Fox River. PHOTO: LINDA ROBERTSON

OUSA president James Heath said students had been queuing up to get involved, and places had been taken up within about 24 hours.

Students would be essentially helping with rubbish collection, but would also be helping Doc with any extra tasks and "scoping out" different areas to see what work was needed.

In March a heavy storm ripped open a disused landfill at Fox Glacier, spilling several decades' worth of accumulated rubbish across 1270ha of riverbed and 64km of coastline.

A statement from Doc said to date there had been more than 850 people working 2912 volunteer days, along with 1090 NZDF days, 681 Doc staff days and 123 Taskforce Green days.

They had removed the equivalent of more than 13,000 bags of rubbish from the Fox and Cook Rivers and coastline of South Westland.

Mr Heath said the student group was heading up with the assistance of the University of Otago and UniCrew Volunteers, as well as Harraways Oats, and the Queenstown Lakes Mayor's Office, which were providing meals.

They would be staying in backpacker accommodation.

He was pleased to see the continued interest in social and environmental issues on campus, students also getting involved in the Ihumatao protest march and running an education session earlier this week.

Doc director-general Lou Sanson said when Doc took over the cleanup on June 19, the prospect of recruiting an army of volunteers to help with the job was daunting.

"We have had people from all around New Zealand, as well as travellers taking time out from their adventures. The effort that people have made to travel to South Westland is just incredible."

Commander of the joint forces of New Zealand Rear-admiral Jim Gilmour said 130 defence personnel, 20 vehicles and a helicopter were supporting the cleanup, which allowed Doc to and workers "to access sites that would otherwise have been inaccessible to civilian four-wheel-drive vehicles."