US needs to play the long game 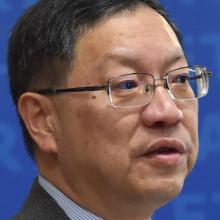 Dingli Shen
A "courageous" initiative by United States President Donald Trump is unlikely to denuclearise the Korean Peninsula in the short term, but can bring important  gains.

Prof Dingli Shen, of Fudan University, China, made his comments in a talk on efforts to denuclearise North Korea, at the University of Otago’s 53rd annual Foreign Policy School in Dunedin yesterday.

For all  the limitations on what might be able to be achieved, the recent initiatives reflected "successful co-operation" in comparative "nuclear threat reduction", in which China and some other countries had played a crucial positive role, he said.

The school  this year is devoted to Asia-Pacific Diplomacy in Transition: Ideas, Institutions and Issues.

Prof Shen emphasised that he was giving solely his own views: "I do not represent China, I represent myself."

North Korea realised that "if you have nuclear weapons,  you’re not attacked", including by the United States, he said.

Possession of nuclear weapons and associated technologies were the only reason  North Korea had been able to "sit at the table" with the United States.

Otherwise, there was "zero possibility" of North Korea having such a role. But Prof Shen said China had applied "severe" and extensive restrictions on North Korea trade exports,  and North Korea also wanted to improve that situation.

Prof Shen said it would take perhaps a couple of decades to fully eliminate North Korean nuclear weapons, and in the meantime some other nuclear weapons could be covertly acquired.

Mr Trump himself realised how difficult it would be to denuclearise the North Korean peninsula.

Some mistakes had been made in the past, but Prof Shen hoped further overall progress could be achieved.

But although there were limits in what could be achieved in the short term, important gains would have been made if North Korea ended nuclear tests and rocket test flights. It was also important for the United States to show  flexibility and contribute constructively to making an overall agreement, if such an agreement was to prove productive in the long term.

"If America gives zero" the overall process would be "not sustainable", he said.

The further talks between the US and North Korea would be "very arduous, very challenging", but progress could be made through step by step reciprocal actions.

- Prof Shen is director of the Centre for American Studies at Fudan University, has a PhD in physics, and undertook postdoctoral research on international arms control at Princeton University (1989-91), in the United States.