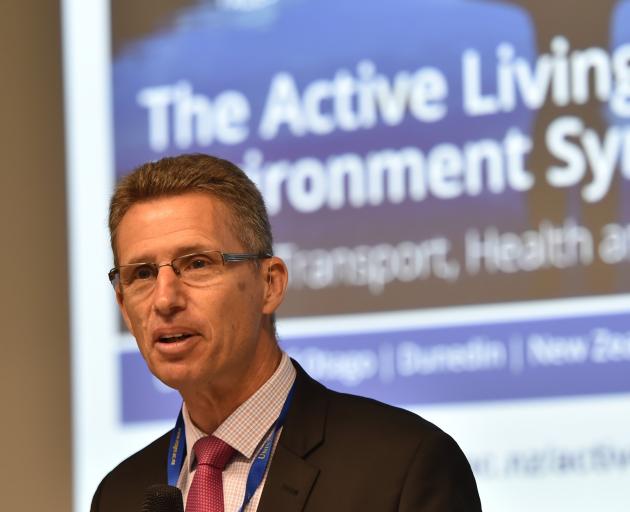 Prof Richard Barker. Photo: ODT files
The University of Otago has denied it has plans for an aquarium or marine institute on the waterfront - despite Dunedin Mayor Dave Cull saying the university is still interested in the development.

Dunedin businessman Ian Taylor has speculated in the past the planned Sustainable Futures building could be a base for Otago and international marine scientists.

Mr Cull on Friday described the university as an "interested" party in waterfront plans for the city.

However, pro-vice chancellor for the Division of Sciences Prof Richard Barker said there were no current plans for an aquarium or marine institute at the site.

He did not respond to further questions.

A proposal to cut three academic staff at the university's department of marine science has revealed the department accumulated a deficit of $12million between 2013 and 2018.

Students have launched a petition against the proposal, which is also opposed by the Tertiary Education Union. However, Prof Barker said on Friday the deficit in the department had reached a level of nearly $30,000 per student, which "cannot continue".

When asked how many other departments used the fleet of boats, Prof Barker said he could only provide information for Polaris II, for which 77% of bookings were from marine science.

"The department of marine science follows a cost-recovery model to cover running and maintenance costs. They have followed a policy of undercharging to try and increase use by other departments."

The Division of Sciences had been actively promoting marine science programmes in schools throughout the country, and through expos and marketing ventures, and was working with the department on a new marketing campaign to bring in students, he said.

" despite Dunedin Mayor Dave Cull saying the university is still interested in the development" err news flash, cull is no longer mayor but his sidekick is.

Ed replies: Mr Cull is officially still the mayor until Friday, when his powers will transfer to DCC chief executive Sue Bidrose until the inaugural meeting of the new council on October 25.

It is a pity that the The University of Otago hasn't any current plans for an aquarium or marine institute at the site. What a great asset it would be to all if one were to be built and being so close to central city would be a great local and tourist bonus... Come on now new Mayor Aaron Hawkins here is your first job -- get onto it and secure this...

We seem to be hearing only one side of the cost-benefit equation. In fact the number of students in the Marine Science Department has almost doubled in the last five years or so. The amount of income from research grants has also increased. The department is actually able to pay its expenses (staff salaries, boat costs etc.) from its income (student fees, research grants etc) and make a small 'profit'. The 'problem' - if there is one - is basically an accountancy problem. The costs that the department is struggling to meet are central university costs, which have risen dramatically in the last few years. Mainly due to changes in the way these costs are calculated. But also due to expensive building projects, campus beautification etc. I was on the University Council when the National Government dramatically reduced the size of university councils in NZ and kicked off most of the teachers, students and public representatives. Staff cuts at Marine Science is the kind of decision you expect at a university run by accountants and business people, who put profit before everything else.