Who needs a ceremony to celebrate? 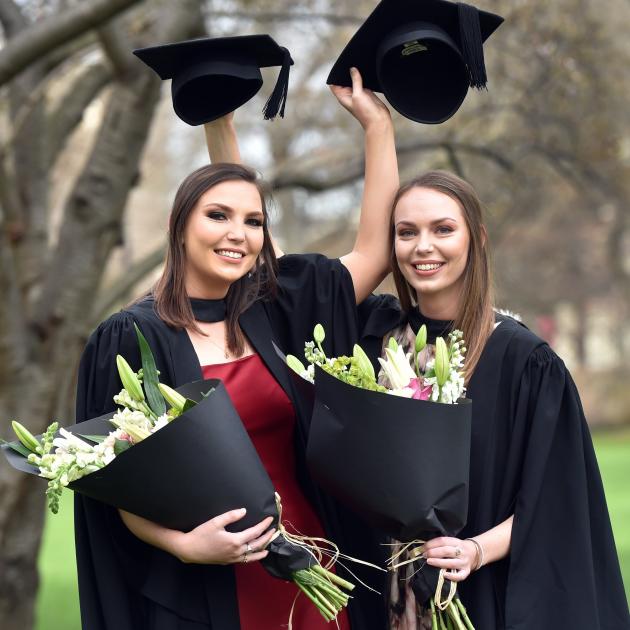 Sisters Rachel (left) and Sarah Lister (25), of Dunedin, mark having gained a bachelor of commerce degree at the same time. PHOTO: PETER MCINTOSH
Two Dunedin sisters did not let a cancelled graduation stop them from celebrating gaining the same degree.

University of Otago graduates Sarah (25) and Rachel (23) Lister donned their regalia on Saturday to mark both having gained a bachelor of commerce degree.

Sarah, having previously gained a bachelor of laws degree, postponed her second graduation last December so she and her sister could graduate at the same time in May.

However, their planned May graduation was cancelled.

The pair thought they would graduate together on Saturday, but Covid-19 restrictions led to their shared big day being called off for a second time.

Sarah said it was disappointing not to walk across the stage at the same ceremony but it was nice celebrating regardless.

"It’s very special ... we’ve decided to treat this like the big day anyway."

The sisters took photos and celebrated with friends and family later in the day.

They were some of about 370 University of Otago graduands who could not graduate in person as planned in a ceremony at the Dunedin Town Hall.

The ceremony was cancelled last week after it was announced Alert Level 2 restrictions would remain.

Sunny weather on Saturday prompted many to hire academic regalia regardless to document their success.

Sabrina Falefatu, of Wellington, was celebrating the completion of her master’s degree in teaching and learning.

The 23-year-old had booked flights for a second time after her May graduation was cancelled, and upon hearing the ceremony would no longer take place decided to fly down with her two best friends anyway.

"We’ve known each other since kindergarten. It’s nice having them here with me even though there’s no ceremony.

"We’ll take photos, do some shopping and get dinner. It’s important for me and my family to celebrate what I’ve done."