By John Gibb
2 Comments
Prof John Reynolds has urged University of Otago graduates to "hold on to your humanity" in an upside-down world of fake news and incidents of hatred.

"The world is going to need your humanity and leadership as we navigate these unfathomable times," Prof Reynolds told more than 300 graduates, at a 1pm ceremony at the Dunedin Town Hall on Saturday.

The graduates in physiotherapy and medicine also had to face unpredictable referendum results, denial of scientific evidence, and "unexpected incidents of unquestionable hatred".

"Embrace the amazing work you will do, helping people get back on their feet, in the case of our physiotherapists literally and frequently, and get up every day excited by the difference you can make in the recovery process," he urged.

Hundreds of University of Otago graduands move along George St on Saturday before two graduation ceremonies at the Dunedin Town Hall. PHOTOS: PETER MCINTOSH
The "humanity and compassion" shown to individual patients, and care for their quality of life in the future would make all the difference, he said.

Prof Reynolds directs the Otago health sciences first-year programme, which he said had been redesigned since 2016, drawing on earlier extensive student feedback.

He was "immensely proud" teaching directly by scholars in the humanities had been put in the programme. They fostered a philosophical framework "fundamental to students’ development as empathetic humans right from the start".

Modelling his advice on the key words of an earthquake survival drill — Drop, Cover and Hold — he urged graduates to drop the act, to listen to people’s stories; to cover all bases with their care — including the patient and their whanau; and to hold on to their humanity. 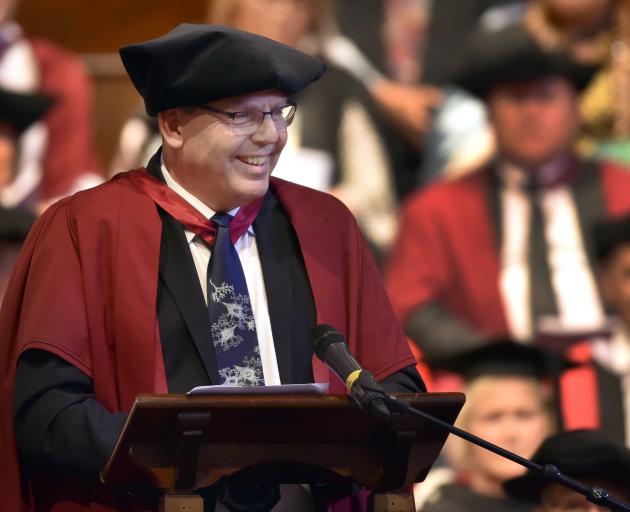 "The traditional silo structure of health delivery, while condemned by many, is still entrenched."

The only way to make a difference in dentistry, pharmacy, medicine or applied health medicine was to work collaboratively, "presenting the same messages and supporting each other", he said.

The health system was continually subject to societal and technological change.

Dr Ross urged the new graduates to serve their patients and not simply by "following the party line and conforming".

Dr Ross, a former chairman of the New Zealand Dental Council, received an honorary doctorate of laws at the ceremony.

Great to see Prof John Reynolds exposing fake news of the compromised news media that pushes the biggest lie ever that carbon dioxide is the enemy of the earth. The radical environmentalists have wrongly demonised CO2.