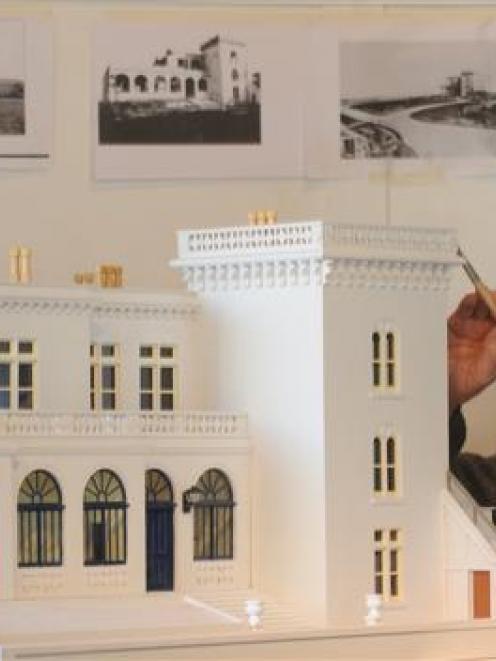 Waikouaiti wood-worker Warren Justice puts the finishing touches on his 1:25 scale model of Cargill's Castle. Photo by Peter McIntosh.
Until recently, Warren Justice was best known to his grandchildren as a "pretty neat" doll's-house builder.

But during the past year, the 68-year-old Waikouaiti wood-worker has "graduated" to being the builder of an intricate 1:25 scale model of Cargill's Castle in St Clair, in Dunedin.

The model, made from medium-density fibre board and rimu, is based on photographs stored at the Hocken Library.

It has elaborate hand railings, leadlight windows and doors, downpipes, lamps, outdoor toilets and wash-house, and even a meat safe.

The model has taken about 1800 hours to build.

Mr Justice said he had previously built four miniature mansions, but nothing of this size and level of detail.

"It was Dunedin's second castle. I chose to build it instead of Larnach Castle because Larnach's was too detailed.

"I'm not up to that level of skill. That could take up to two years to build and I haven't got that kind of time."

When Mr Justice started the project, he planned to give the model to the Dunedin City Council.

However, the Cargill's Castle Trust found out about the model, and chairman Steven De Graaf said the trust wanted to use it for promotional events.

Eventually, it was hoped the model would be put on permanent display at the Otago Settlers Museum in Dunedin.