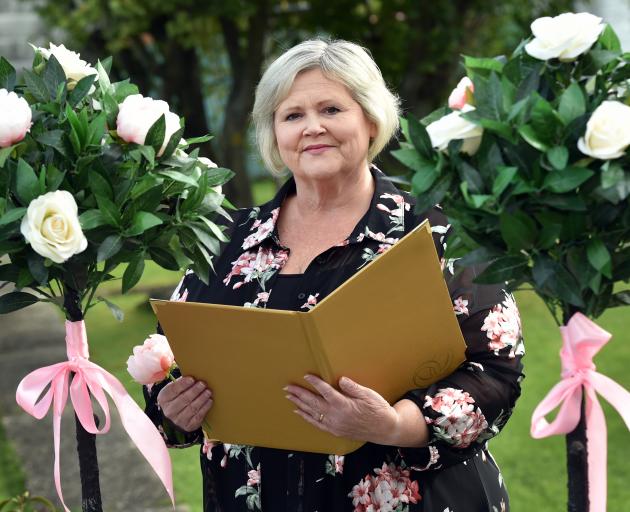 Celebrant Robyn Johnston is preparing to navigate the changing format of weddings and funerals in the wake of Covid-19. PHOTO: PETER MCINTOSH
Those tying the knot during the Covid-19 outbreak are looking at alternatives such as video-conferencing and small weddings now, followed by larger celebrations later.

Grandview Gardens owner-operator Jo Lindsay had six cancellations in April for weddings at its Outram venue, but most had re-booked for next year.

Couples were being realistic and flexible, she said.

"They know it’s better to be safe than sorry and postpone their weddings."

There would be a change in the way weddings were run and organised in the next few months or longer.

"I think you’ll see there will be more weddings with Skype involved."

With international borders closed, people could no longer travel for a wedding.

"People might choose to invest in a good videographer rather than something else so they can share their big day.

"My advice would be don’t rush it. If you’re going to regret not having the people you love there, then don’t do it just yet."

One couple who had to cancel their wedding said it was a chance for them to have a bigger budget and do things differently, she said.

Grandview Gardens held weddings from September to April, and Mrs Lindsay hoped the next booked wedding in October would go ahead as normal.

Celebrant Robyn Johnston said a couple who were due to fly from Australia to be married in Dunedin next year cancelled their wedding as they decided they would no longer be able to afford the trip.

"Unfortunately, people are losing money and jobs, and a wedding has to be sacrificed in the bigger scheme of things.

She said the Level 3 restrictions would mean weddings became more like eloping.

"By the time you’ve got the celebrant, the couple and two witnesses, it’s like eloping, really.

"I think some people might decide to get married and postpone the big celebrations for later. A wedding now and a reception later on."