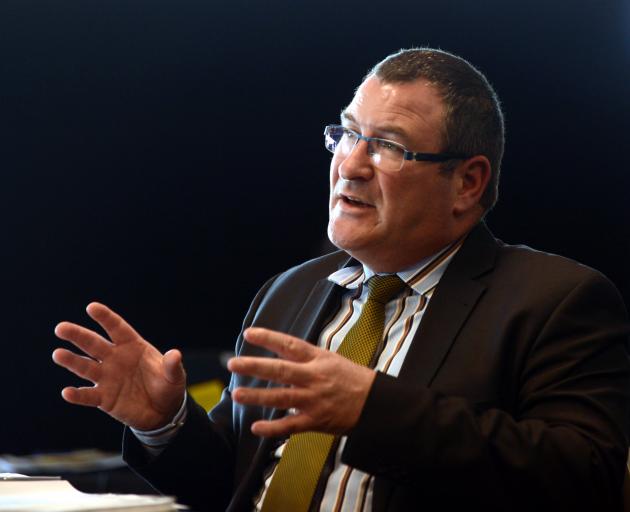 Det Snr Sgt Kallum Croudis has been criticised over his handling of a case which resulted in a woman's confession being thrown out by the court. Photo: Peter McIntosh
A senior Dunedin police officer has been slammed by the court over his involvement in a case in which he had a conflict of interest.

Detective Senior Sergeant Kallum Croudis spoke to a suspect at least three times without being part of the investigation team.

Judge Michael Crosbie also criticised the officer's record-keeping and his ''casual approach'', which resulted in police obtaining an unlawful confession from the woman regarding the death of a Dunedin man.

In his judgement ruling the confession inadmissible, released to the Otago Daily Times last week, he described the police investigation as ''haphazard'' and noted Det Snr Sgt Croudis was a friend of the dead man's father.

Southern district commander Superintendent Paul Basham said the comments of the court would be taken very seriously and ''the issues raised in the judgement are of concern''.

A spokeswoman later confirmed police would not pursue the prosecution against the woman.

On April 21 last year, a 39-year-old died in his sleep after injecting morphine prescribed to someone else.

It was eventually found that his death was the result of a pre-existing medical condition and the class-B drug was present only at therapeutic levels.

Gary Lloyd Potter (57) admitted a charge of administering morphine and was sentenced to 10 months' home detention in February.

A woman in her 30s - whose name is suppressed - was also suspected of involvement.

Before police knew the cause of death, they had concerns the man had overdosed and Det Snr Sgt Croudis was suspicious the duo who had been with the man that night may have played a role.

At a hearing before the Dunedin District Court in May, the officer acknowledged he knew the victim's father and attended the scene as he expected he would have to break the tragic news to the family.

Despite having no official role on the team investigating the case, in the days following the incident Det Snr Sgt Croudis questioned the two who were with the man before his death.

At the May hearing, he said he spoke to the female defendant at least three more times before she had a ''voluntary'' interview at the station.

''This was a significant amount of contact, unusually so, given that DSS Croudis was not the officer in charge and, it appears, not an integral part of the inquiry team,'' Judge Crosbie said.

On May 6 last year, the woman spoke to Sergeant Sheldon Kindley at the Dunedin central station as a witness, rather than a suspect.

The judge said while the interviewing officer may not have been fully aware at the time, there was at least a circumstantial case against her.

''This was not a spontaneous interview, nor was it truly voluntary,'' he said.

Only towards the end of the discussion, when the defendant had incriminated herself, was she given her Bill of Rights caution - essentially: the right to remain silent, to speak with a lawyer and the warning that anything said may be used as evidence in court.

She was later charged as a party to the crime of administering the morphine.

At a hearing almost a year later, Sgt Kindley conceded he should have given the caution earlier but there was a suggestion by police part of the statement may be admissible as evidence.

However, Judge Crosbie ruled the entire statement was improperly obtained.

Along with Det Snr Sgt Croudis' influence in the background of the investigation, he highlighted ''an absence of file notes or contemporaneous records'' of the officer's input.

And the judge was scathing about his evidence in relation to job sheets, some of which took months to be disclosed to defence counsel John Farrow.

''DSS Croudis' responses were somewhat disconcerting, given his seniority and the obligations around disclosure,'' Judge Crosbie said.

''DSS Croudis' evidence portrayed a casual approach, at least by him, to the inquiry and something of a conflict of interest given his relationship with the deceased's family.''

Private investigator Tim McKinnel, who was intimately involved in Teina Pora's long-running battle to clear his name, said police had a ''really clear set of policies and procedures'' around conflicts of interest.

There was a form they filled out and the situation was managed by superiors, he said.

''In my experience, judges cloak their comments in fairly moderate judicial language, so when there are rare occasions they are openly and directly critical, it certainly gives rise to concern,'' he said.

University of Otago dean of law Prof Mark Henaghan said the police and anyone in power had to be held accountable and the courts must act as a check on that.

The Bill of Rights caution given to every suspect was integral to the justice system, Prof Henaghan said, because some people assumed they had to answer every question police posed.

''Some suspects can talk for themselves but many can't,'' he said.