Long and winding road to sentencing 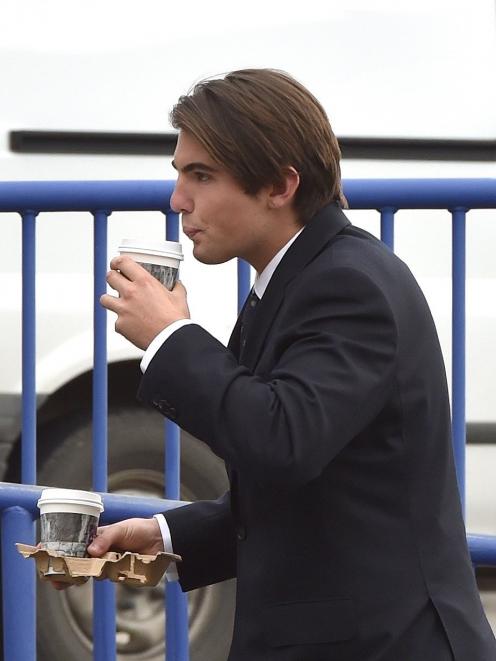 Nikolas James Posa Delegat heads to the Dunedin District Court in June last year. PHOTO: ODT FILES
The criminal charges faced by Nikolas James Posa Delegat, the son of a wine magnate rich-lister, have attracted much attention since they first came to light following a late-night attack on a Dunedin female police officer. Otago Daily Times reporter Timothy Brown has followed the case since the attack. He reports.

Nikolas James Posa Delegat's attempts at anonymity and keeping a clean criminal record have now spanned four courts and more than 1000km as the case has moved from Dunedin to Auckland and back again.

And Judge Phillips' decision to convict Delegat and sentence him to 300 hours' community work may not mark the final chapter of the case with his lawyer, Mark Ryan, indicating a possibility of appeal.

Delegat came to the court's attention after a late-night assault on Dunedin Constable Alana Kane on March 26 last year. He knocked her unconscious with a closed fist to the head and threw at least three more subsequent blows.

During the row, which occurred due to a friend's derogatory remark about his then girlfriend, Delegat also punched a Campus Watch staff member, causing him to slip. Delegat then kneed the grounded man in the face.

He also punched a hole in a security window of Starters Bar and lashed out at arresting police officers.

Const Kane was taken to Dunedin Hospital, where she required 15 hours of treatment.

Delegat was taken to Dunedin Central police station, where he was verbally abusive and refused to answer questions.

He was charged with the aggravated assault of Const Kane - a charge carrying a maximum sentence of seven years' imprisonment, the assault of Campus Watch staff member David Ogilvie, wilful damage of Starters Bar's window and resisting arrest.

Five days later, he appeared in the Dunedin District Court.

At this point, Delegat's background as the son of Jakov ``Jim'' Delegat, one half of the brother-sister duo in charge of the Delegat wine empire, remained unknown.

The matter was transferred to the Auckland District Court, where interim name suppression was granted.

Delegat's fight for name suppression lasted six months as he argued through the Auckland District Court and, subsequently, the High Court and Court of Appeal, that publication of his name would be prejudicial to a fair trial and cause personal hardship.

The judgement of the Court of Appeal remained suppressed until yesterday, when parts of it were allowed to be published following the conclusion of criminal proceedings against Delegat. However, details of his reasons for appeal remain under permanent suppression.

While Delegat was fighting for name suppression, he was also preparing for trial on his criminal proceedings, pleading not guilty to aggravated assault, assault and wilful damage. He entered those pleas in August last year.

His trial was to take place nine months later. However, that date passed without Delegat taking the stand and a month later, in June this year, he pleaded guilty to an amended charge of assaulting a police officer with intent to obstruct her in the execution of her duty - a charge carrying a maximum sentence of three years' imprisonment - as well as to the two other outstanding charges.

Crown prosecutor Robin Bates conceded at yesterday's sentencing that Delegat was entitled to a discount for an early guilty plea to the new charge, despite the plea coming almost 15 months after the offending.

The ODT unsuccessfully sought an interview with the officer injured in the attack. Police were unwilling to comment on the sentence yesterday.

However, some details of Const Kane's victim impact statement, read yesterday by sentencing Judge Kevin Phillips, provided an insight into her feelings.

``She considers the defendant as showing no remorse,'' he said, a remark that drew a shake of the head from Delegat.

``It is very recently when he pleaded guilty that there was an approach for a restorative justice conference,'' Judge Phillips read.

Const Kane felt ``he had 18 months to do something about it''.

In asking for a discharge without conviction, Mr Ryan said Delegat was willing to undertake community work in conjunction with police and local authorities to address the ``rather out-of-control drinking culture'' at the University of Otago.

``Mr Delegat wants to give something back to the police and to the community,'' he said. ``He's wanting to help and mentor other young people who have problems with alcohol.''

Judge Phillips obliged Delegat in his hopes of giving back by sentencing him to community work, but rejected the proposition of discharge without conviction.