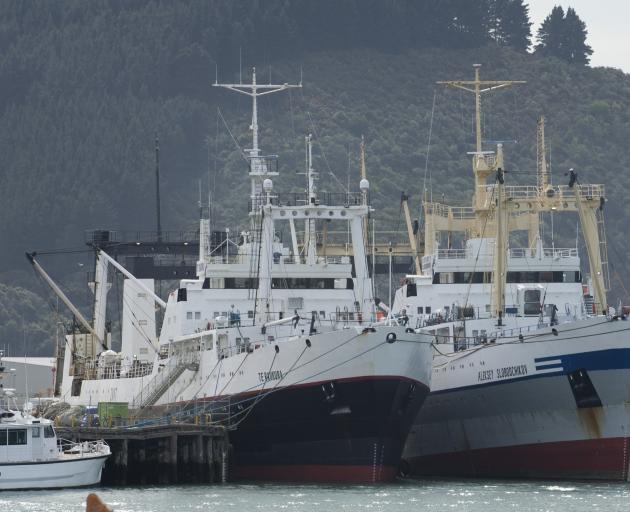 Te Raukura (left) and Aleksey Slobodchikov berthed at the T/U sheds in Otago Harbour. PHOTO: GERARD O’BRIEN
A pair of fishing vessels docked in Otago Harbour are operated by one of the companies which flew 440 foreign seamen to New Zealand, 11 of whom have tested positive for Covid-19.

Te Raukura and Aleksey Slobodchikov, berthed at Port Otago’s T/U sheds in Dunedin for three weeks, are operated by Maruha, which along with Sealord and IFL chartered two flights and paid for the costs of a 14-day managed isolation for the Russian and Ukrainian fishermen.

Eleven of those seamen tested positive for Covid-19 yesterday while in a quarantine hotel in Christchurch, despite testing negative before boarding a charter flight to New Zealand last Friday.

Another 14 cases are "under further investigation", the Ministry of Health has confirmed.

The Sudima Hotel, near the city’s airport, was placed in lockdown yesterday afternoon after a staff member told chief operating officer Les Morgan there were a "number of infections".

"All are imported cases detected at routine day three testing. None involve cases in the community," the ministry said.

"All relevant public health measures are being taken ... to minimise the risk to public and staff."

The Otago Daily Times understands the fishing company is looking to change crew on both vessels.

The company did not respond to a request for comment on whether it was looking to crew the boats with the Russians and Ukrainians now in quarantine.

Earlier this month a Port Otago harbour control spokesman said the vessels were in Dunedin for maintenance.

Te Raukura was expected to leave Port Otago on November 5 and Aleksey Slobodchikov on November 19.

Port Otago chief executive Kevin Winders could not say if the fishermen brought into Christchurch would come to Dunedin after their isolation to work on the two ships.

He referred inquiries to the agent of the vessels.

Speaking generally, he said whether crew from a ship could come ashore was now determined by a Ministry of Health official or medical officer of health.

Previously, the ports could decide which workers could come ashore based on maritime border rules passed down by the ministry.

Tapley Swift shipping agent David McLean said he was only the local agent and declined to comment.

Maruha New Zealand operations manager Tim Law could not be reached for comment.

That boat has been in downtown Dunedin for some time. It's within stroll distance of the Octagon - I just hope that all the crew have been staying on board in that time.