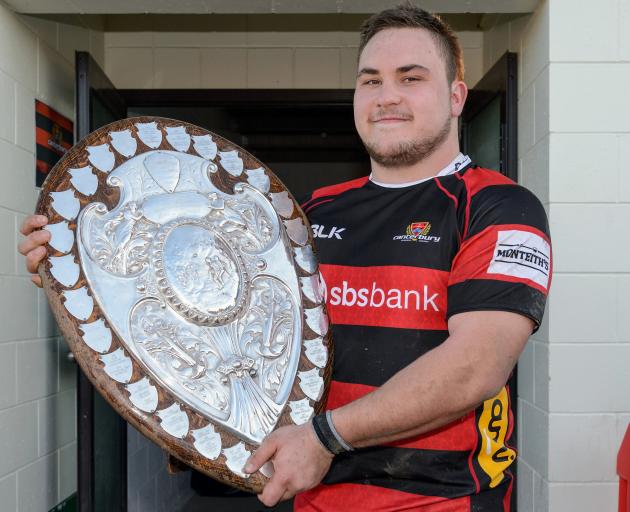 Joel Hintz, posing with the Ranfurly Shield, has failed in his appeal to have a violence conviction quashed. PHOTO: GETTY IMAGES
A top rugby player and junior weightlifting world champion may have had his international sporting dreams permanently dashed.

Hawke's Bay prop Joel Nikoli Hintz (23) was convicted of injuring by unlawful act in November 2017 after admitting punching a man at a Dunedin student party.

Two years later he took the matter to the High Court in a bid to have that conviction wiped because, he claimed, a miscarriage of justice had occurred.

Justice Rachel Dunningham accepted Hintz might have been under psychological strain at the time he pleaded guilty to the violence but he was aware of the potential consequences and made the decision regardless.

The burly forward was playing for the Canterbury provincial team at the time of his original court hearing but moved on to Wellington the following year and donned the black and white of Hawke's Bay this season.

"He has international aspirations and wishes to represent New Zealand at the highest level," the court heard at appeal.

"He records his concerns about the effect of the conviction on his selection and his ability to travel to represent New Zealand."

Hintz had been offered a contract with a Japanese team between November last year and January, but his conviction resulted in the offer being withdrawn.

He also had to pull out of a prospective role as an adventure guide in Canada for the same reason.

The incident behind the protracted legal case occurred on April 4, 2017, when Hintz and friends had come to Dunedin as part of their course at Lincoln University.

They were socialising at a party in Queen St, when the defendant saw two men wrestling in the back yard of the property.

He punched one of them in the face, though there was some conjecture over whether the victim had lashed out at him first.

Justice Dunningham accepted there was a possibility of a self-defence argument and defence lawyers at the time gave the defendant similar advice.

"His priority was to deal with the proceeding as quickly as possible and at low cost, without exposure to his parents," Crown prosecutor Craig Power said.

Hintz said the allegations made him depressed, unable to sleep, he missed meals and struggled to apply himself to the demands of training and playing rugby.

The day before his sentencing, it was revealed in court documents, police offered him diversion if he paid the victim $5000 for the dental work he required.

However, police found out he had previously been given diversion for waving a knife out of a car window the previous year and the offer was withdrawn.

Hintz opted to be sentenced the following day.

According to his appeal counsel Gary Turkington, the man had limited comprehension of his options and "simply gave up".

Hintz was "a broken man", he told the court.

"It is understandable that now he has the support of family members and has revisited the option of defending the charge, he regrets the decision he made," Justice Dunningham said.

"However, regret over the choice made is insufficient to reach the threshold for setting aside a conviction."

There was no miscarriage of justice, she ruled.