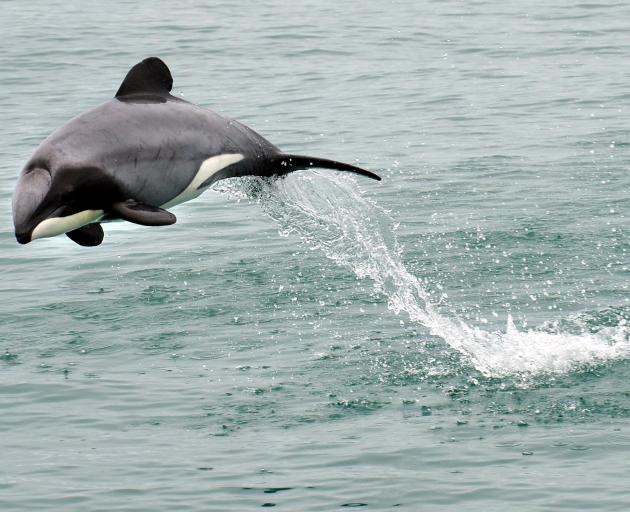 A Hectors dolphin makes a spectacular leap. PHOTO: STEPHEN JAQUIERY
A commercial fisherman made "fundamental errors" that put endangered dolphins at risk, a court has heard.

Lance Edmond Nicolson (34) was fined $11,900 and a forfeiture order was made for the vessel Charlotte Rose as well as the set-nets he used, when he was sentenced at the Dunedin District Court this week.

He was also ordered to pay costs of $2046 to the Ministry of Primary Industries.

University of Otago professor of zoology Liz Slooten said there were about 10,000 Hector’s dolphins left in New Zealand.

They could only just detect set-nets, which are made out of fishing line plastic, but "tend to blunder straight into them and drown", she said.

Although Prof Slooten supported the fishing restrictions, she said the prohibited area should be extended to protect the endangered dolphins.

Forest & Bird regional conservation manager for Otago and Southland Rick Zwaan agreed it was time to extend the area, which would also protect the endangered hoiho (yellow-eyed penguin).

Nicolson was found guilty at a judge-alone-trial in the Dunedin District Court in October of a charge of using a set-net within four nautical miles of the coast at both Kakanui Point and Kaka Point.

Between October 13 and November 6, 2019, Nicolson fished six times in the prohibited area.

At the trial, counsel Ann Stevens QC argued Nicholson "exercised due diligence both before and after the offences based on his understanding".

She argued the circumstances that led to her client fishing inside the prohibited area were out of his control and he used his navigating equipment to the best of his ability.

At the time, Nicolson admitted he had twice "just [come] out to what looked like four miles".

In a written decision, Judge David Robinson said, ultimately, the defendant knew of the limit which had been in place since 2008.

His use of radar and reliance on it on those occasions was "operator [error]", and he should have read the manual for it as well as for the chart plotter, which would have given him a better understanding of his location.

"Means of avoiding or breaching the prohibition were readily available," he said.

Important in sentencing, the judge said, was that other commercial fishing businesses were deterred from committing the same offence.

Nicolson was regarded as a "person of good character" references provided showed.

The four-nautical-mile law was established to protect Hector’s dolphins, which reside off the coast of New Zealand and are an endangered species.

Ministry regional manager of fish compliance Garreth Jay said: "The rules are there for a reason and most people do the right thing and follow them closely."

"When they don’t, we will hold them to account."

In November, the ministry issued a forfeiture notice for Anderson Fishing Company Ltd vessel Naturaliste II and associated fishing equipment after the commission of similar offences in the region.