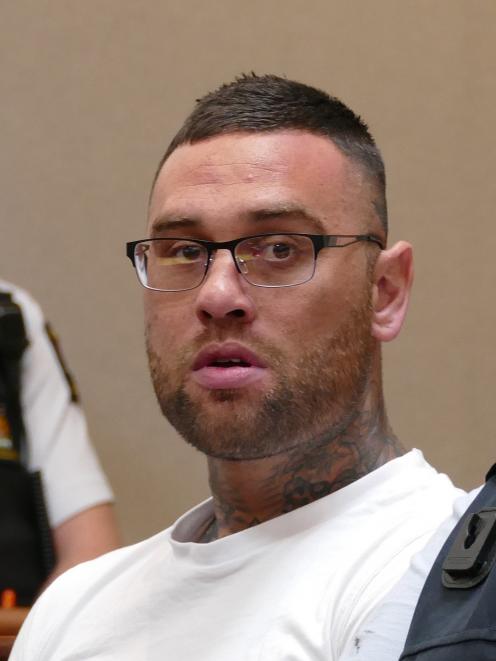 Kurt Winklemann. PHOTO: ODT FILES
After detaining his victim, Kurt Tamati Winklemann beat him, told him he would shoot him in the back of the head then put a beanie over his face and drove him to a rural roadside.

The man was made to kneel, his hands bound behind his back, his eyes covered.

But rather than a gunshot to the head, the victim was shot twice in the hand.

He was left bleeding as Winklemann and an unidentified accomplice left the scene.

The 32-year-old, a boxer who has represented the country internationally, appeared in the Dunedin District Court yesterday after pleading guilty to wounding with intent to injure, committing a crime with a firearm, threatening to kill and possession of class-B drug MDMA and drug utensils.

Winklemann was jailed for four years, two months and will have to serve the entire term because two of the charges constituted a second strike under the three-strikes regime.

Judge Michael Crosbie said there was no doubt the defendant was a talented athlete, intelligent, had run his own business and was dedicated to his children.

Winklemann had a history of significant violence, he noted, and last year’s offending represented "something of a relapse".

On March 22 last year Winklemann became aware of allegations the victim had sexually abused a woman many years earlier.

He took to Facebook, where he sent a flurry of messages, first asking to meet the man then quickly becoming threatening.

Winklemann told the man he would drag him into a shallow grave.

"Everytime u hear a strange noise I want u to think to yourself ... this is it ... the moment he comes to get me cos I don’t care hoe long it takes ima make you disappear ... " he wrote in one message.

It continued the next day with explicit references to the victim being shot.

Winklemann’s gang connections were known to the victim, the police summary stated.

Later that day, the defendant visited the man’s home and drove him back to Mosgiel.

At Winklemann’s house, the violence began.

He punched the victim several times, causing severe cuts to his head and face, the court heard.

Winklemann’s associate was present at the time and there was a chilling conversation that followed.

"There was a discussion about what to do with him and a comment was made to the victim that he should be shot in the back of the head tonight," police said.

The victim’s hands were tied behind his back with ski rope and he was bundled into the back of Winklemann’s Holden with a beanie acting as a blindfold.

The men drove him to Huntly Rd, in Outram, where he was shot twice in the hand with what police believed to be a .22 rifle.

Residents came to the victim’s assistance when they heard his cries of pain and his attempts to use his cellphone to call friends.

When police executed a search warrant at Winklemann’s home on April 1 they found 6.3g of MDMA and some cannabis, along with a bong and pipe.

The victim was admitted to hospital and treated for injuries to two of his fingers. He refused to provide a victim impact statement for the court.

Judge Crosbie said the crimes were not an instinctive reaction to hearing the sexual allegations against the victim — they were premeditated.

"Vigilante justice," he called it.

Counsel Anne Stevens QC highlighted a cultural report on Winklemann which assessed him as having strong rehabilitative prospects should he avoid alcohol, stay away from gangs and get adequate exercise.

A 26-year-old man was charged alongside Winklemann but those charges were dropped last year.