Criticism goes with the territory: artist 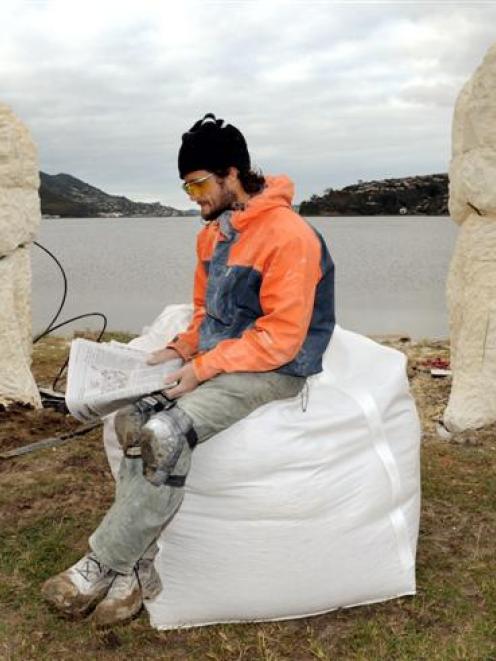 And if people were so concerned about the area where it was sited, "Why was it such a dump" when he started work there, he said when Otago Daily Times staff visited him yesterday seeking comment on criticism of his work.

Mr Gentry had not read the comments from ODT readers - some of whom thought the $45,000 installation was an April Fools' Day joke - as he has been too busy working 12 hours a day to complete the work for the official opening on April 10.

Even then, the installation would take about five or 10 years to mature as the six teeth "decay and change", he said.

The work would be an improvement to the area, from which he had removed six sacks of rubbish, 22 tyres, bits of cars and other debris.

Those concerned the teeth spoiled the view of the harbour could still sit in front of them, he pointed out.

Public art had to appeal to 4-year-olds and 80-year-olds and could not be "massively cerebral" works which needed much explanation.

Mr Gentry, of Wellington, is no stranger to public criticism.

The proposed site for his Subject to Change work in Wellington was changed three times, he said.

Some people "hated it" but predictions it would be high-maintenance because people would cover it in graffiti had proved unfounded.

That work, from wood and galvanised steel, was a creative replica of two walls of a Cuba St heritage building, reflecting the changing face of inner-city Wellington.

Cr Richard Walls, a member of the art in public places committee which makes recommendations to the Dunedin City Council, said the committee knew the sculpture choice was going to be controversial.

He is the only councillor on the advisory committee, which is made up of "a diverse group" from within the community which had "the background" to make a recommendation on the work.

He welcomed the debate, saying it had given people something else to focus on other than "the bloody stadium".

"It seems to me that's what it is all about. We all have opinions.

"We talk about them and then have a good red wine and laugh about it."

He considered the work would "put a bite into Portsmouth Dr".

Cr Walls said he was not at the committee when the decision was made and had not been able to attend many meetings.

It had been a challenge to get a work and had taken the voluntary group two years to get this far, he said.

He was happy a committee within the council had not been asked to come up with a design, as "we would probably have ended up with a denture".

Ms Oranje has now retired from the committee and will be replaced by Debbie Hogan and Sue Larkins, both with planning expertise.

Ms Forsyth is also retiring, but her replacement has yet to be chosen.