The university made its concerns known yesterday at the first day of second generation Dunedin city district plan (2GP) hearings on the topic of heritage.

University planner and policy adviser Murray Brass called for fewer restrictions, but emphasised it was generally supportive of the approach of council planners on heritage.

"I don’t think there is a great deal of difference between ... the university and DCC staff."

However, he was concerned the proposed rules and the way they were worded could have unintended consequences, which could actually prevent heritage buildings from being protected. 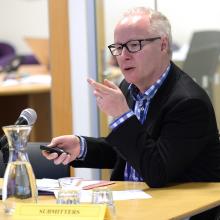 Only allowing listed buildings to be demolished when they posed a safety risk was overly restrictive and building owners should be able to demolish buildings if the positive effects outweighed the negatives.

He brought up the example of a residential house in Cumberland St which the university would likely have to demolish as part of "quite extensive" plans to redevelop Union Lawn.

It had investigated relocating the house, and determined it would be "hugely costly and very, very risky".

The university  also opposed the Castle St heritage precinct being extended to the part of the street south of Dundas St, which would place "new controls" on an area where most buildings were owned by the university.

That section of road had in recent years been sold to the university, so the aim of protecting amenity in a public place did not apply and the university already had a good track record when it came to maintaining heritage.

The panel earlier heard from council planner Emma Christmas and heritage policy planner Glen Hazelton about their attempts to take a flexible approach, which favoured working with building owners rather than placing restrictions on making changes to buildings against their wishes.

Dr Hazelton said, based on his experience, "forcing" owners to protect a building often did not lead to good outcomes.

This was why the council was reluctant to add restrictions to buildings against an owner’s wishes and instead went for a "collaborative" approach.

This had worked in the warehouse precinct where some building owners who were initially reluctant to have their buildings protected changed their minds.

However, there were some examples where "exceptional" or "unique" buildings had been protected against an owner’s wishes.