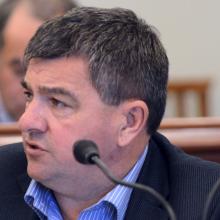 Mike Lord.
Taieri farmer and councillor Mike Lord has decided to seek re-election to a seat on the Dunedin City Council, more than a year after saying he felt ''a bit disillusioned''.

Cr Lord was quoted to that effect in the Otago Daily Times in May 2015, a year and a-half into his first term as a councillor.

A resident on the Taieri for 25 years, Cr Lord was elected for the Mosgiel Taieri ward in 2013.

''It is difficult to talk about individual achievement, but as a council we have made some really good gains,'' he said.

The council had been restrained in its spending during the past three years and did not commit to a lot of projects, which placed the city in a much better position, he said.

''Every decision we make is for every part of the city.''

Cr Lord pointed out that the councillors had help from a ''really good chief executive and a really good top staff '' and as a result ''there has been some good stuff happening''.

He was happy there was ''committed money in the budget'' for the Mosgiel pool project.

Cr Lord said the existing pool in Mosgiel was 82 years old and ''is cold on a warm day and shocking on a cold day''.

He said a pool was needed in the fastest-growing area in Dunedin and defended the $15million price by asking, ''Where else do you see a community reaching into their pockets to pay half?''

Cr Lord said he was a little concerned about losing his ward, but ''never presumed that the community will always vote for me''.

''They might feel differently this time, but I am a local person and I do fight for local issues,'' he said.

If every decision you make is for every part of the city, you're run off your feet. Unless the next council can triage, prioritise, plan, we're all headed for stasis, progress wise. Does Cr Lord have a view on South Dunedin, apart from reportedly being snippy about Cr's Benson-Pope and MacTavish, as mover and seconder? Do leafy hill suburbs want rates spent on the Mosgiel pool, the equally important South Dunedin hub, the odd acceptance of unfettered freedom camping, because it livens up the place a bit?