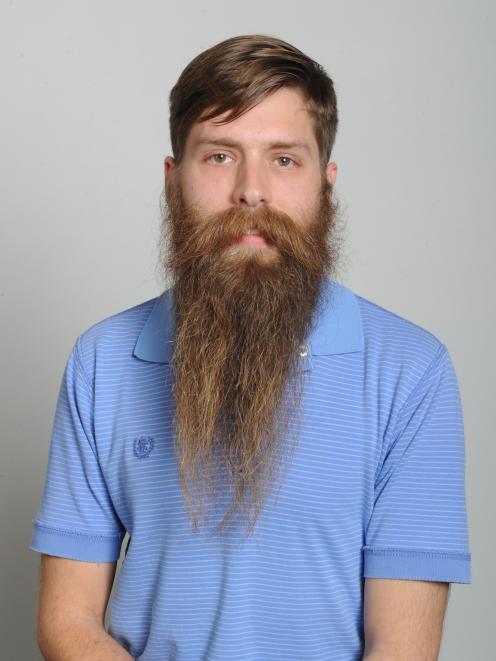 Dunedin mayoral candidate Abe Gray wants to market the city by turning its stories into legends. Photo by Christine O'Connor.
What do you know about the 11 Dunedin candidates who are contesting the 2016 mayoral election? Chris Morris puts the questions to Abe Gray.

Abe Gray says Dunedin needs to do more to sell itself to the world.

And, if elected mayor, he plans to do more to market the city overseas, while seeking new ways to boost the city's revenue and ease the tension between rates and service costs.

The city also needed to start preparing for how best to tackle the eye-watering costs associated with climate change and sea-level rise in South Dunedin, Mr Gray believed.

And Mr Gray, a prominent cannabis reform campaigner, said he would meet the sobering challenges head on - by abstaining from smoking cannabis ''during work hours''.

''I think that is just courtesy.''

I feel that Dunedin has been run by an old boys' network the whole time I've lived here. Dave Cull was supposed to be breaking that mould . . . but I feel like he didn't really deliver.

I've volunteered over 40 hours a week for more than the last decade for community organisations, as well as working at the same time.

I just feel like somebody needs to get in there and do the job, for the good of the ratepayers, and not trying to increase their own profile or enrich themselves.

I have a transparent track record of essentially working for free for community organisations for a decade. In fact, my quality of life would be much greater if I don't get elected. I don't need the money and my life is pretty fun now. I get to do pretty much whatever I want, but I'm willing to go to work fulltime for the people of Dunedin, because I love the city.

What relevant experience do you have?

I've run an organisation for the last three years, Aotearoa Clear Charities, that commands a budget in the five figures. Obviously the DCC and its subsidiary entities are a lot bigger than that, but I do have experience in leading and organising community organisations.

I have a bachelor of science and a master of science degree in botany, and I've been a university lecturer, tutor and demonstrator over the past 10 years.

What are the major issues for this election?

There are some obviously clear issues, like the future of South Dunedin. To me, one of the big issues is reversing the Dunedin brain drain. Part of what makes Dunedin great is having all these really intelligent and talented young people in our city, but they don't stay.

I think what we've seen in Dave Cull's most recent term, anyway, is a lot of debacles that have arisen from cost-cutting, penny-pinching and cutting corners, trying to save as much money as possible because of the debt situation.

What would you change in that area?

There's no silver bullet, obviously, but the only way to increase spending, but also keep paying down debt and not have rates rises, would be to get more revenue for the city.

That could involve novel business ideas for Dunedin City Holdings, and there's various options that can be discussed there.

Dunedin needs to punch above our weight, both nationally but also internationally . . . promoting Dunedin and Dunedin tourism, and unique, quirky reasons to visit Dunedin, of which we have many.

Would you seek to promote cannabis law reform while mayor?

At this stage, local body politics doesn't have a lot of relevance to cannabis law reform . . . If the national legislation were to change, capitalising on those revenue opportunities would be a very good creative strategy for Dunedin, I believe.

While cannabis remains illegal, will you be smoking if elected?

If I was elected, I would definitely abstain during work hours. I think that is just courtesy.

How would you deal with the threat to South Dunedin from flooding and climate change?

Clearing the mud-tanks and keeping them clear should be a first priority. As far as the long-term goes, there's not going to be an easy solution. In my mind, we're talking a major engineering undertaking. That's going to be very expensive.

I'm no expert on sea engineering, but there are experts in many other countries . . . we should learn from those experiences and we should seek expertise from those people in those areas . . . so we know what the potential best and worst-case scenarios are.

But that is your preferred option over, say, managed retreat from South Dunedin?

Yes. Managed retreat to me is not equitable . . . It's a slap in the face to 10,000 residents to just say 'managed retreat' without any actual plan for it.

What we're doing well is our branding strategy, in terms of emphasising our wildlife attractions, our heritage architecture and our youth culture focus. Those three things are the real strengths of Dunedin.

Dunedin is the coolest city . . . being cool is one of the things we've got going for us, and we need to play that up, but that doesn't mean getting drunk out of our skulls, as some people seem to believe.

I would just say all the cost-cutting and penny-pinching. All this wrangling of cycleways - there wouldn't be any complaints if they were done to a high standard. But then when they're not . . . you just end up with something that has to be ripped out and replaced and everybody looks stupid.

What is your overall vision for the city?

My vision for the city would be to be not the biggest city, but the best small city and also the coolest city in New Zealand.

We want Dunedin to be a legendary destination to visit, do business and to live, internationally.

Who did you vote for in the last national election, and how would you describe your politics?

My own politics are obviously very coloured by the cannabis issue. I would say I'm traditionally left-wing, if you want to put that label on me, but I'm disgusted by the lack of backbone shown by the Labour Party and the Green Party on the cannabis issue.

Most recently I've just voted on the cannabis issue and I've given my party vote to the Legalise Cannabis Party.

How are you going about your campaigning and funding?

I am only going to spend a couple of hundred dollars. I have a photocopier, so I'm just making a bunch of black and white pamphlets to deliver to letterboxes . . . and then just meeting people - I'm pretty well known.

Have you attended council meetings?

I've watched some of the videos. Unfortunately, due to my work schedule, I'm often not able to attend the meetings.'